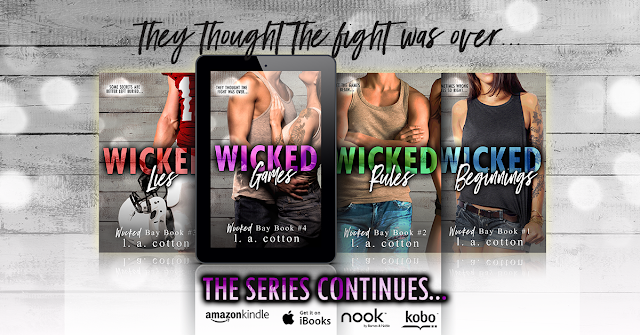 All Maverick Prince ever wanted was to play basketball in college. So starting for the Steinbeck Scorpions should be a dream come true. But not everyone wants to see him succeed. Just because you’re on the same team, doesn’t mean you play by the same rules.


Lo Stone thought her life was finally on an even keel. As if being a senior and having to think about her future isn’t bad enough, she’s a stranger in her own house. And the longer she goes without seeing Maverick, the harder it is to ignore the little voice of doubt whispering in her ear.

They thought the games were over, but the war is only just beginning...

GET YOUR COPY HERE

I'm so happy to be back with these guys especially Maverick and Lo. I love them all but Lo and Maverick are fast turning into one of my favourite couples.

Maverick is starting at college and what will hopefully be the first step of living his dream of playing professional basketball. Lo will be at home doing her final year of school. After everything the couple have faced they are finally in a good place but how will this separation impact their relationship.

Of course Maverick finds trouble but this time he's not the instigator. We see just how much he's grown as a person over the last few books. The author touches on a very real subject that affects lots of young people I felt this was tackled really well.

Lo is struggling not just with Mav being away, she has had so much to deal with and I personally never felt she had grieved properly. I'm going to say it again, her dad is a knob at times it's like he forgets he has a daughter who needs him.

I loved reading about how as a couple they deal with their issues and the support of their little possy. I just love them all, I'm not sure I'll ever want to stop reading about them.

I'm not sure I can say that without sounding like I'm trying to be a surfer dude-ette. Yeah, I would take it back but...Kyle won't let me. He said something about screenshots being forever (or he would if he were reading this!)

The Stone-Princes aren't an average family. They are not the Brady Bunch. No, they are a billion times better! There is snark, sarcasm, wit, and love. love - hate, love, and tolerant love. The Stone-Princes may be more than you can handle but I know I would consider helping bury a body to be a part of this family because once you are family...YOU ARE FAMILY!

I have been a nervous wreck since LA Cotton released a teaser chunk of a random not so happy scene. I was angry. I went a little Hulk smash on my pillows. I even resorted to rocking in the corner because these guys are my family. I feel everything for Lo and Rick. I need their happily ever after. But LA Cotton likes to tease, taunt, and show you she's in control, so watch out for audible gasping, rage shaking, and the need to smack someone. All of those are signs that Wicked Games is under your skin. If these symptoms continue, you have two options:
- keep reading and hope for the best
- keep reading while kicking ass and taking names

Nothing else will help. Symptoms may subside but arise at a later time when you are dwelling or taken back to the story. It is nothing to be worried about. However, if you are experiencing withdrawal or symptoms of separation anxiety, please consider hitting Barnes & Noble for paperbacks- no one will be able to take them away from you.

This has been a public service announcement brought to you by... 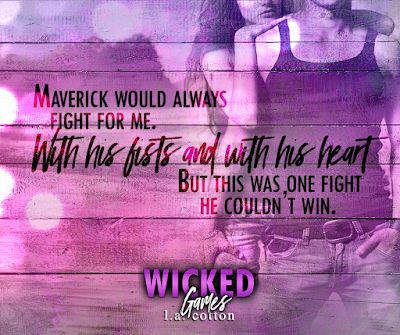 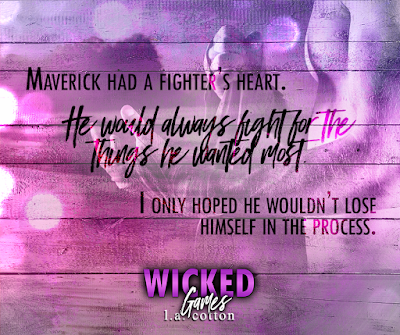 “Maverick?” I gasped at the sight of my boyfriend leaning against the hood of his car. “What are you—”


He stalked toward me, buried his hands in my hair, and kissed me. Deep and slow and full of unspoken promises. Our tongues tangled together as he guided me against the side of his car, pressing into me, showing me just how much he’d missed me.


“Maverick,” I murmured, curling my hands into his t-shirt.


“Fuck, I’ve missed you,” he breathed between kisses.


When he finally pulled away and stared down at me with those intense eyes of his, my mind cleared. “Why are you here?” I arched a brow. I wanted to believe it was because he missed me and just had to see me but there was something glittering his eyes.


His walls slammed up and he narrowed his eyes. I let out a heavy sigh, able to see straight through him. “Kyle told you, didn’t he?”


“It should have come from you.”  He gave me a pointed look that I felt all the way down to the pit of my stomach.


“That’s not fair.” I stepped back, running a hand through my hair. “I called last night to tell you and you were—”


“Shit, I know.” He tilted his face skyward and let out a long sigh. “This, me being away, it’s harder than I thought it would be.” When his eyes met mine again, my shoulders relaxed, the annoyance ebbing away.


“I know. We both just need to give it time.” I slid my fingers through his belt loops, pulling us together. “And we both need to relax a little. I can’t freak out every time you go to a party and you can’t freak out that I’m working here.”


He stiffened but I yanked harder. “Maverick.”


“I won’t pretend to like it, because I don’t.” His dark gaze flicked behind us to Hitters. “But I trust you, Lo, and I know you need this.”


“Thank you.” I leaned up pressing a kiss to his jaw, but Maverick dipped his head, capturing my lips in a breath-taking kiss.


“Maybe we should take this somewhere else,” I whispered. “Unless you have to get back to SU?”


“I don’t need to be back until morning. You have me all night.” His voice was thick with need, and it softened something inside of me.


“Perfect. I’ll text my dad and let him know we’ll be at the pool house.”


His eyes danced with desire as he kissed me again and then opened the door for me. I slid inside and waited for him. There was so much I wanted to ask but I didn’t want to ruin the moment either. So I sat quietly while he drove us back to his house.


“I can’t believe you’re here,” I said as he pulled into the drive away and cut the engine.


“Both, I guess,” he admitted, reaching over and sliding his fingers into mine. “I’m not going to lie to you, Lo, I was pissed when Kyle told me about Hitters. But mostly, I was pissed it came from him and not you.”


“Maverick, I— you’re right. I should have told you. I should have made you listen. But Gus is good people. And Sarah and Liam seem really nice. And it means I don’t have to be there so much.”


His expression softened. Maverick didn’t need me to spell it out for him, he knew how hard things had been since Stella and Bethany had moved in a little over a week ago. “Come on, let’s go inside. We’ve missed you.”


“We?” I asked as I climbed out of the car. Maverick smirked, holding out his hand for me.


“Yeah, me and him.” He dropped his eyes to his crotch and I rolled my eyes.


“I thought you dug that cocky humor he has going for him?”


“Gross.” I smacked his arm. “That’s my cousin you’re taking about.”


“When you say it like that...” Maverick grimaced and pulled me into the yard. The Stone-Prince house had become my second home over the summer. Which was weird since I once hated the place and everything it stood for. But now I kind of loved it. Not to mention the fact it housed three of my favourite people.


“Should we go inside and say hello?” I flicked my head to the main house, but Maverick was already pulling me toward the pool house.


“We can say hello later or in the morning.”


I couldn’t hide my smile at that. Even if it was only a flying visit, Maverick was home and didn’t want to waste a single second of it.