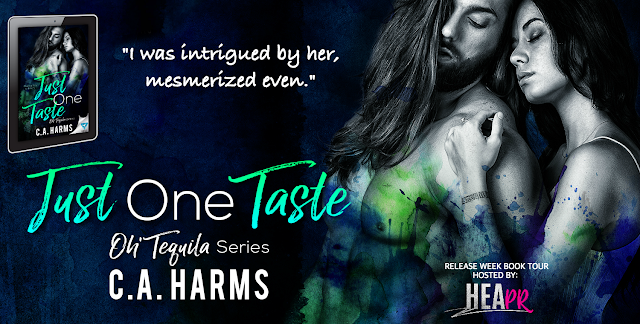 The Oh Tequila Series by CA Harms is back!

Just One Taste is LIVE today on Amazon!
Click here to buy!

Add this Romantic Comedy to your TBR! 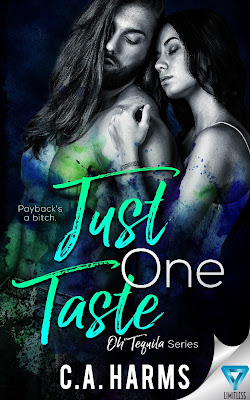 I’m the jokester, the one who pulls the best pranks. I’m the guy in the house who the frat brothers avoid for fear of what they’ll wake up to face the next day.

But now, the jokes on me. Literally on me! In BIG. BOLD. BLACK LETTERS!

A tattoo, of another guy’s name. I was branded, and no one else can know.

The problem is I don't know how it got there? Who the hell is Blake? Worst of all why the F*ck did I have a guy’s name tattooed on my wrist to begin with? What could have possessed me?

I’ve done a lot of things, tortured a lot of my brothers, and I’ve loved every single minute of it.

The only things I remember are…dark hair, smelling of sweet honey and maybe something floral, soft hands, and the sweetest laugh.

So tell me, how I can get from a memory like that, to waking up in the backyard beside the pool, with a F*ucking tattoo? Of a dude’s name?

Oh Tequila, what have you done now?

Warning- The shenanigans that happen in these pages are meant to be shared. Just don't do them at my house!
Wild times and crazy friends.
Oh Tequila could have been a love song...but it seems more like a lament. LOL. This frat has me both worried and wanting to join. Shaking my head. Chaos and hot men are my idea of a good time. Tattooed, Princes, and Cats...oh my.
Just One Taste is fun, funny, and entertaining. With a seemingly shy female lead and a silent broody male, I couldn't wait to start. Of course the blurb had me so excited...
Bad decisions, challengers, and rowdy fun are going to have you flipping pages without delay. 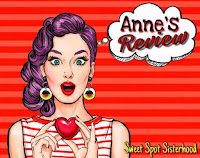 I haven’t read the first book in the series but I don’t feel like I missed out by not doing so.
This is Elijah and Blake’s story, now I didn’t know who Blake was so that was an interesting revelation. In the frat house Elijah is the joker the king of the pranksters, I found myself giggling like a little kid at them.
Blake’s home life is horrendous I seriously wanted to do some damage the words affected me that much. As a character Blake was someone I instantly liked and wanted to know more about. When she gets together with Eli we see a whole new side to her, the fun and fiesty side of her comes out when she gets involved in the pranks everyone better look out. Eli at first glance comes across as a bit of an idiot but he’s a big gentle sweet teddy bear where Blake is concerned.
A fun story with drama and emotion sprinkled throughout. 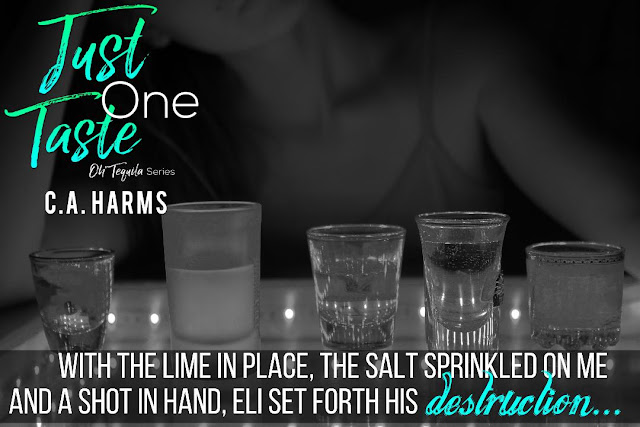 START THE SERIES WITH BOOK ONE,
JUST ONE CHANCE! 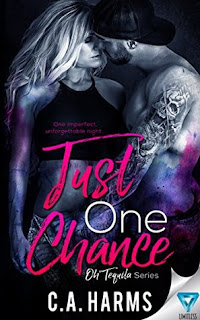 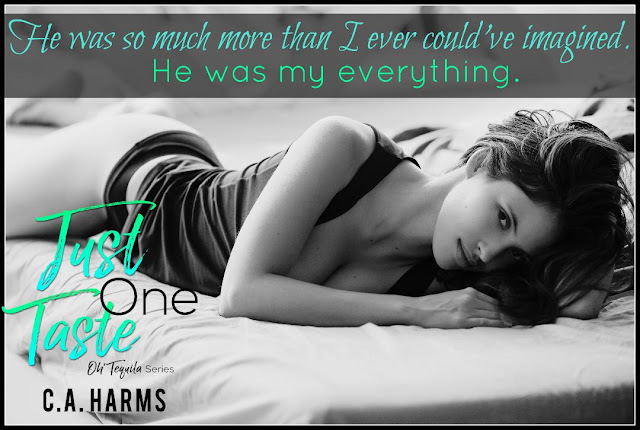 Ever had this feeling like you’re being watched? Like each move you make is being analyzed, dissected, and documented for later use?

Well, I have. It was a lingering feeling ever since the moment I’d been challenged by Clayton. Everywhere I turned there he was.

The guy was a god damned freak, watching me out of the corner of his eye, silently observing. It was annoying and if the asshole expected me to get a buzz he’d need to quit killing the effects of the tequila. With each shot his beady little eyes became an instant sober alert.

“Why are you watching the twin so closely?”

I looked down to my left into the curious eyes of Xavier’s girl, Morgan. It was part of being so much taller than everyone else, and it didn’t help that she was a short little thing either. “The twin?” I asked with a smirk.

“Yeah,” she shrugged, “I still have no clue how to tell which one is which.”

“Corbin has a freckle on his upper —”

She holds up her hand to stop me. “Truly, I don’t care. I’ll still call them twin one and two.” Did I mention she was a sassy little shit too?

I wrapped my arm around her shoulder, fully expecting her to gut punch me as I dragged her toward her boy. Xavier saw us coming and immediately stepped away from the group of people he was talking to in order to pull her away and out of my hold.

I chuckled, knowing just how much he hated for any of us to touch her, even if it was only the simplest of ways. Most of us did it often just to irritate the piss out of him.

“Occupy your girl, she’s getting nosy.”

I turned to walk away, feeling something collide with the back of my head. I looked back just in time to see an empty plastic water bottle bounce along the floor before rolling to a stop only a few inches away from Morgan’s feet.

X chuckled as Morgan crossed her arms, challenging me in what I could only assume was some form of some girly standoff. She’d been around for some time now and was beginning to act like her man. “I’m not nosy.”

“What do you call it then?”

“Same thing, and shit like that gets people thrown in pools.”

“Are you threatening me?” She uncrossed her arms and placed them on her hips.

I was just about to take a chance of being pummeled by my brother for throwing his crazy ass girl in the pool when I noticed another girl step closer to Morgan’s side. It was the brunette from Porter’s Pizza. The same brunette I’d seen in the place almost every time I visited, yet still didn’t know her name. I had seen her often, and fuck, the girl made me weak in the knees; that shit never happened to me.

I did, however, enjoy observing her from afar. I knew this — I’d consumed more pizza over the last few weeks than I had in the last few years combined. I also knew the way her cheeks reddened when a man openly flirted with her; I had done that a hundred times it seemed but still hadn’t been formally introduced.

I was intrigued by her, mesmerized even.

I was feeling a little free tonight though so that might change.

I watched as she continued looking between Morgan and me, and the last thing I wanted was for her to witness the pool dunk and think I was some dick. So instead I looked back toward Morgan and answered her question from earlier. “Clayton,” I say, pointing toward the beady - eyed fucker who was still watching me, “thinks he can outdo me. He’s the Sober Brother tonight and apparently, he thinks that he can pull the mother of all pranks.”

“So, he’s planning on coming up with something bigger than permanent marker dicks on someone’s face, nipple piercings, naked twins on front porches, and blue dye in body wash?” She holds up her hands, counting off each item she named on her fingers.

“The blue dye was me, babe,” Xavier corrected her and she waved him off.

She looks behind her toward Clayton and he nods in agreement. “Well, this party may be worth staying at until the end just to see you suffer, Red. Payback is a bitch and these guys have a whole lot to give back.”

That they did, but I wasn’t worried.

“You actually pierced someone’s nipples?” The brunette asked that question as she wrinkled up her nose in confusion.

“Yep,” Xavier announced before I could and grabbed the hem of his shirt to lift it and exposed the piercings he still wore. That was a prank that backfired; who knew the guy would have loved them? It was almost the same situation I had with my Prince Albert when I let my best friend convince me to get it done after our high school graduation. It turned out to be one of the craziest and most pleasurable things I had done, or so I’d been told. It was a secret I’d managed to keep hidden so far.

“You did that?” I watch as the girl observed Xavier and suddenly I wanted to grab the shirt he still held high and pull it down.

“I did,” I said, regaining her attention. “Why? You want yours done?” 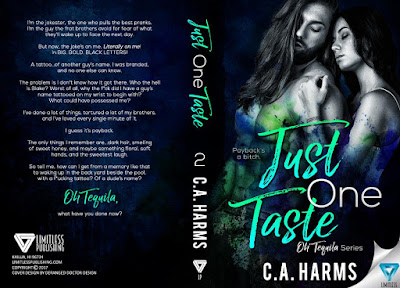 C.A. Harms is like any other addicted reader. She enjoys happy endings and HEA love stories. She hasn't always been a lover of Romance and had once been addicted to a good Mystery. Just recently she has taken on a new liking and now is a full-blown Romance novel addict.

She lives in Illinois and enjoys spending time with her husband and two children. You will always find her with her kindle or paperback in hand as it is her favorite pass time. 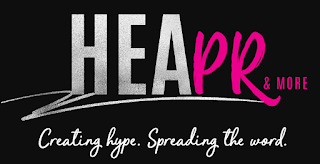