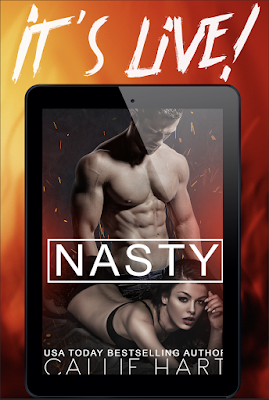 You can read Nasty for FREE now on KU! 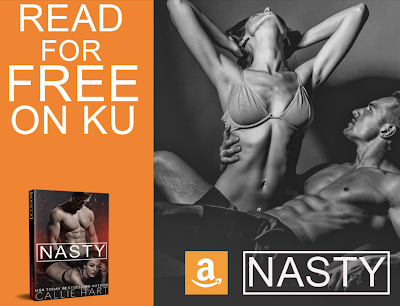 Sera Lafferty isn’t insane.
She’s always made the smart decisions.
She has a career. A loving sister. The carefully mapped out, peaceful life in Seattle that she’s craved since childhood. So why, then, does she suddenly find herself on a scavenger hunt, traveling across the country with a stranger? And not just any stranger. A maddeningly sexy hitman, who’s been paid to end her life.

His past is shrouded in secrets, and his eyes are filled with ghosts. Sera knows she should head back to Seattle, to sever all ties with her handsome man in black. But leaving him might not just hurt Sera in the end. It might end up getting her killed.

Fix Marcosa damn well knows better.
He’s been focused on his goals ever since the fateful day he swore to avenge his friend’s brutal attack. Booze. Drugs. Violence. Sex. Nothing has distracted him from his mission. But Sera is more potent than alcohol, more addicting than any opiate. She makes the fury in his blood sing. And her body? Her body is utter perfection, and he just can’t keep his hands off it. Or his mouth for that matter.

Screw the money. Screw the consequences, and screw anybody stupid enough to stand in his way.

He’s damn well going to save it.

We pick up the story where we left off so it's essential that you read Dirty first.

Sera and Felix are fabulous characters both are very complex and their story was so compelling I read it in one sitting. We get to learn more about Felix's backstory, who he is and why he got into the murder business. Most people would run a mile when they find out about him but not Sera, she just takes it all in her stride.

I love everything about this series, the fast pace of the story keeps you guessing and wanting to find out what's going to happen next. The mystery of who the client is and how to find them leads them into dangerous territory.

The ending had me screaming with excitement and made me want the next one so much more. I take my hat off to the author because never did I imagine that bravo.

Posted by Sweet Spot Sisterhood at 12:51 AM