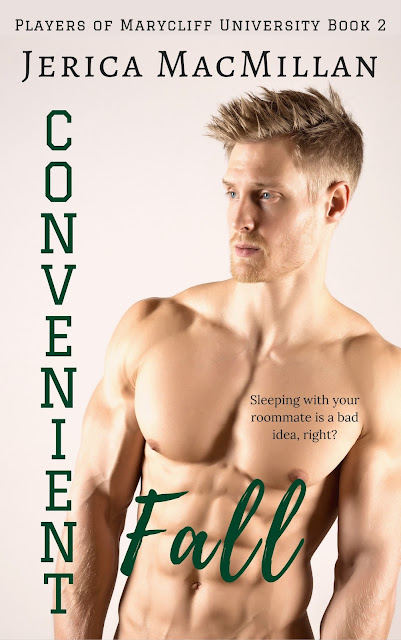 Megan Davidson is scrambling to find a new place after Abby, her roommate and best friend, decides to move in with her boyfriend Lance. With just a week until classes start, the open spot left in Lance’s old house looks like her best option. She moves in with Matt and Chris, hot football players who are shameless flirts and notorious players.

Chris Watkins is playing his final season of college football before life as he knows it is over. He’d dreamed of going pro, but the NFL never scouted him and now he’s in self-destruct mode—not bothering to go to classes or even try to graduate. With everything falling apart, he can’t even lose himself in the jersey chasers that are always hanging around. Megan caught his attention over the summer, and with her constantly under his nose, he can’t get her out of his head.

Sparks fly when these two finally give in to their attraction. Will these roommates turned lovers manage to keep things light and easy like they planned? Or will their flame burn hotter than anyone is ready for? 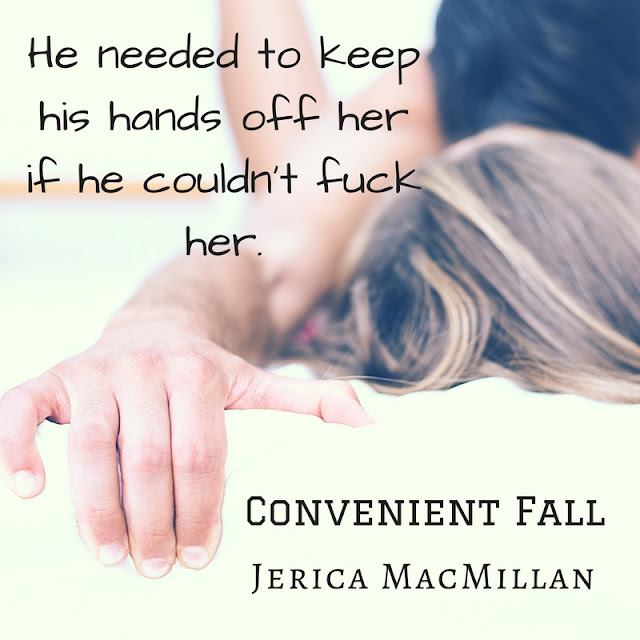 Sullivan waited until his girl got a good grip on Megan's arms and stepped backward as fast as he could in the water. It was enough that Megan lost her balance and Chris couldn't keep her upright with the other chick dragging Megan down by her arms.

She came up laughing, pushing her hair out of her face and wiping the water out of her eyes. She splashed water at his chest. “You let me fall off!”

He grinned down at her. “I couldn't help it! You got taken out.”

She poked out her lower lip in a fake pout that only lasted a second before she smiled again. “We're supposed to be a team. That means we go down together. Aren't football players supposed to understand the importance of teamwork?”

“Are you questioning my loyalty?” She laughed at him, and he grinned back, his eyes on her mouth. Her lips were plump and red, begging to be kissed. He loved the way she looked, her hair wet and slicked back, her face lit up with a smile.

“It looks like they're going again. Do you want to keep playing?”

Megan's voice pulled his attention back from his wandering thoughts. Giving in to his lust with her was probably a bad idea. Unless maybe she was interested too …

She gestured at the others. “Are we going to play again?”

Man, she was distracting. He nodded once and grinned. “Let's go.”

He dropped down again and she climbed back on. He suppressed a sigh as he realized this was the closest he was going to get to feeling her thighs around his head, and it wasn't from the direction he wanted. But she was his roommate. He needed to remember that.

They played two more rounds of chicken fight. They lost the next round early but won the one after that. Megan sat on his shoulders with her arms raised. “Whoo! We won!”

He laughed, then maneuvered her so she turned and slid down his front. They were pressed together for a moment, her breasts squished against his torso, the bare skin of her belly against his lower abdomen. Megan looked up into his face, and he saw her brown eyes get darker. He dropped his eyes to her lips. They were parted on an indrawn breath and he wanted to kiss them so bad.

She broke the spell of the moment, stepping back, breaking the contact between them, and he immediately missed the feel of her body pressed against his. “Thanks. I had fun.” She glanced over her shoulder toward the shallow end, then looked back at him. “I’m, um. I'm going to go get a drink.” 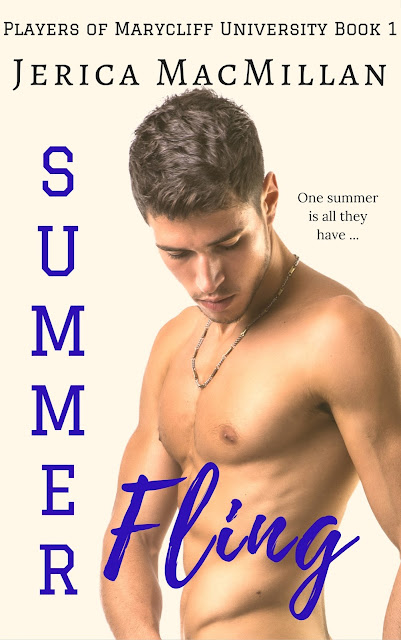 Lance is a notorious player on and off the football field who never sees a girl more than twice. But with graduation now behind him, his days of carefree flirting are numbered. As soon as his summer internship is over, his parents expect him to return to Texas to take his place in the family business. He’s done everything he can to delay the inevitable, and he’s determined to live it up his last summer as his own man.

Abby comes from a world where men don’t stick around. Lance’s interest does nothing but put her on guard, especially when she finds out he’ll be leaving in less than two months. With two years left of college and a mom who relies on her for everything, Abby doesn’t have the patience for relationships that are doomed from the start. But Lance's persistence wears down her defenses. Abby convinces herself they’ll just have a summer fling, and she’ll be able to come through unscathed.

Will Abby be able to maintain her distance? Or will they both be heartbroken when the summer ends?

If you love steamy college romance featuring hot athletes and sassy heroines, check out this first installment in the hot new series everyone is raving about!
|
|
V
iBooks   Amazon   Kobo   B&N 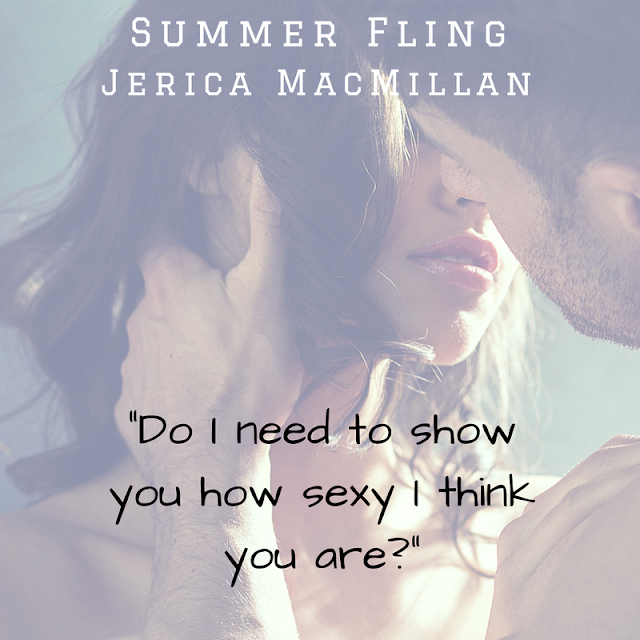 Abby nodded, and Lance moved in to kiss her again. His tongue swept past her lips, sliding against hers, teasing and tasting. His hands, like earlier, roamed down her back and gripped her ass once again. He pulled her tightly against him, grinding their hips together.

Her hands were trapped between them. She ran them over his chest, feeling the planes of his muscles, gripping the fabric of his t-shirt to pull herself closer.

One of Lance’s hands traveled up to her back, sliding under the hem of her tank top, teasing the skin just under the waistband of her shorts. His fingers slid lower, sliding along the top of her ass, while his other hand kneaded her flesh through her clothes.

With a small sound of frustration in the back of his throat, Lance broke off the kiss. He led her the few steps to his bed, sitting down on the edge and positioning her between his legs.

Abby wasn’t sure what he was doing. She stopped caring when he raised her shirt and began kissing her stomach, his tongue teasing along the edge of her belly button. Her hands went to his head, threading her fingers through his hair, enjoying the feeling of his mouth against her skin. She felt his hands slide up the backs of her thighs. He gripped her ass briefly before sliding around to the front. He made short work of unbuttoning and unzipping her shorts, pulling back so he could look at her face and watch her reaction.

He didn’t immediately push her shorts off her hips like Abby had expected. He left them hanging there, running his hands back around, caressing her waist and hips before finally sliding his hands under the fabric.

He groaned when he encountered bare skin. “Abby, are you wearing underwear?”

She licked her lips and nodded. “A thong.” Her husky whisper matched his. 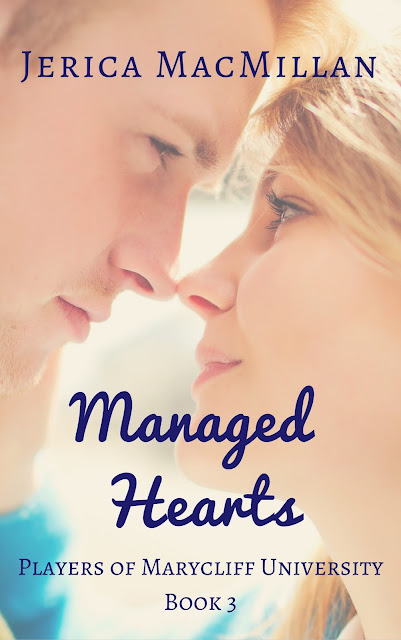 Matt’s tired of being the third wheel around his friends, especially when he was the only one who ever wanted a girlfriend. And then Hannah Glover shows back up in his life—the girl who simultaneously made him want a relationship and ruined him for anyone else without him even realizing it. He wants her now more than ever, but she doesn’t trust him after the way he ended things before. Which should be fine since he’s her manager at his first job out of college, and their company has a strict no fraternization policy. But Matt just can’t seem to help himself where she’s concerned. And she won’t be an intern forever, right?

If you love steamy new adult romance, check out the third installment in the Players of Marycliff University series now!
|
|
V

Jerica MacMillan is a lifelong reader and lover of romance. Nothing beats escaping into a book and watching people fall in love, overcome obstacles, and find their happily ever after. She was recently named a semi finalist in Harlequin’s So You Think You Can Write 2015 contest.

Jerica is living her happily ever after in North Idaho with her husband and two children. She spends her days building with blocks, admiring preschooler artwork, and writing while her baby naps in the sling.

Join her Book Club at www.JericaMacMillan.com and get a free book!

Posted by Sweet Spot Sisterhood at 3:21 AM