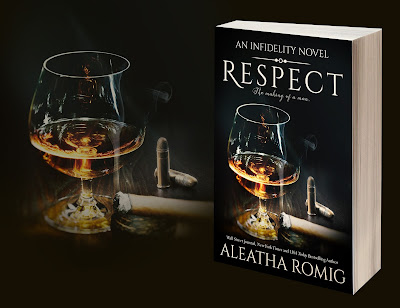 “The making of a man”

From New York Times, Wall Street Journal, and USA Today bestselling author Aleatha Romig comes a stand-alone novel, a spin-off from her beloved Infidelity series. With classic Aleatha Romig twists, turns, deceptions, and devotions, this new epic mafia love story/ thriller will delve into a world where family takes on new meaning, and even the inhabitants are suspicious of the next chapter.

“Standing at what I believe is the precipice of my life, I, Oren Demetri, was too young to understand that it wasn’t and too old to imagine that it couldn’t be.

The already hefty accumulation of my successes and failures, bravery and fears, and rewards and suffering, had brought me to this point. It was hard to contemplate the things I’d done, and yet in reality, I’d only begun to learn the possibilities.

I suppose that’s how it was for me at twenty-nine years of age on the brink of all I’d ever wanted without fully realizing the price I would pay. Yet in that moment, I knew there would be no cost too great or sacrifice I wouldn’t make. I had no idea how far-reaching that moment of self-discovery would be because as the congregation’s murmurs quieted, bleeding into silence and allowing the thump of my heart to be the only sound I heard, I was a man filled with love and adoration, emotions in stark contrast to those I needed in the world I’d built or the one I was about to enter.

Angelina Costello was my dream and now my reality. I’d worked diligently to move beyond the actuality of being a dockworker’s son to becoming a self-made, successful entrepreneur, all in an effort to earn the right to call her my own. I’d overcome servitude to others, collecting their paychecks and lowly praises, to become the one who signed the paychecks and offered the accolades when they were rightfully earned.

The world was my oyster and walking toward me on the arm of her uncle was my pearl. I’d found her amongst the empty shells life had offered. There was no need to pry open another possibility. Angelina was all I wanted. Yet my path was uncharted. There was more for me to earn, lose, and willingly give.

This stand-alone novel may be read before or after reading the Infidelity series or on its own.

I have many of Ms. Romig's books. Two signed paperbacks and many of them in ebook. I even have several in audio book. But aside from a seriously hot novella in an anthology I had to buy in paperback as well, I haven't read them. Until now.

I wasn't sure what to expect based on the novella, but Respect wasn't it. I think I spent the entire book waiting for the other shoe to drop. As I didn't know any of the characters, I formed incorrect assumptions. I thought it was actually going to end differently. And I never- not in chapter one, ten, or thirty- thought I would be brought to tears but after experiencing so much...how could I not?

Respect has a fully developed cast of characters. It has an awesome blend of real and fictional aspects. It may be the "past" but that's easily forgotten as you devour its pages.

I personally found it hard to get into. I think I was intimidated by missing out on the previous series. If you give up the misconceptions and attack it head on, I think you will get caught up in the Costello family. It's getting out that could be a problem...

I haven’t read any of the Infidelity series reading this has made me want to dive right in.

This is the story of Oren and his true love Angelina, it follows them from their first meeting to marriage and babies and the inner workings of the ‘family’.

We see Oren make choices both good and bad, he’s a man who starts out with ambition wanting a better life s successful life then Angelina makes him want to be a better man. Slowly the life he has to fit into corrupts and slowly he becomes a stranger to his family.

Angelina was my favourite character in the book, she dealt with everything she endured with faith, strength and loyalty. My feelings for Oren fluctuated, his obvious love for Angelina made me swoon but as the story unfolded my faith in him dwindled. His penance brought me full circle and I fell once more.

I enjoyed this book the writing as always was on point , I’m going to use this as my introduction to the Infidelity series. 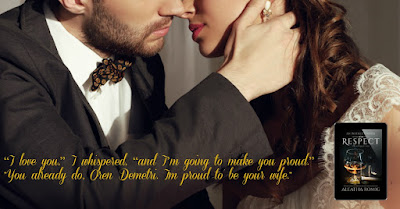 Angelina Costello was the only woman to ever take my breath away. I couldn’t not speak to her. “I haven’t seen you since NYU.”

“I’ve been living overseas, studying history and architecture in Italy.”

“Italy! Molto bene. And now you’re back?” I asked.

Her lips curved upward. “I see you now.”

With a glint to her gaze, she said, “I never forgot you. I thought at one time...” Her head tilted innocently as her lip momentarily hid behind her teeth. “Are you sure you aren’t still scared of me?”

“Angelina, I’m quite certain that I’m terrified of you.”

Her smile grew. “Bene. Then let me give you my number.” 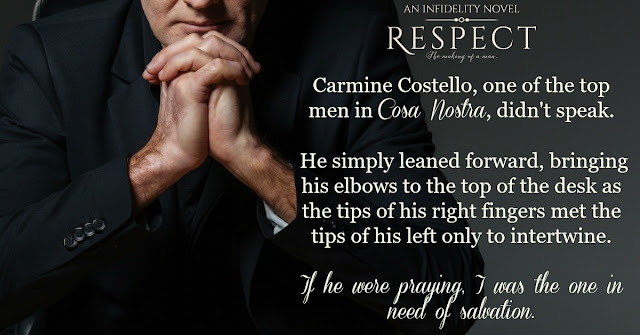 Aleatha Romig is a New York Times, Wall Street Journal, and USA Today bestselling author who lives in Indiana, USA. She grew up in Mishawaka, graduated from Indiana University, and is currently living south of Indianapolis. Aleatha has raised three children with her high school sweetheart and husband of over thirty years. Before she became a full-time author, she worked days as a dental hygienist and spent her nights writing. Now, when she's not imagining mind-blowing twists and turns, she likes to spend her time a with her family and friends. Her other pastimes include reading and creating heroes/anti-heroes who haunt your dreams and bring your imagination to life!

Aleatha released her first novel, CONSEQUENCES, in August of 2011. CONSEQUENCES became a bestselling series with five novels and two companions released from 2011 through 2015. The compelling and epic story of Anthony and Claire Rawlings has graced more than half a million e-readers. Aleatha released the first of her series TALES FROM THE DARK SIDE, INSIDIOUS, in the fall of 2014. These stand alone thrillers continue Aleatha's twisted style with an increase in heat.

In the fall of 2015, Aleatha moved head first into the world of dark romantic suspense with the release of BETRAYAL, the first of her five novel INFIDELITY series that has taken the reading world by storm. She also began her traditional publishing career with Thomas and Mercer. Her books INTO THE LIGHT and AWAY FROM THE DARK were published through this mystery/thriller publisher in 2016.

In the spring of 2017, Aleatha released her first stand-alone, fun, and sexy romantic comedy with PLUS ONE, followed by the sweet stand-alone, ONE NIGHT.

Aleatha is a "Published Author's Network" member of the Romance Writers of America and PEN America. She is represented by Kevan Lyon of Marsal Lyon Literary Agency.