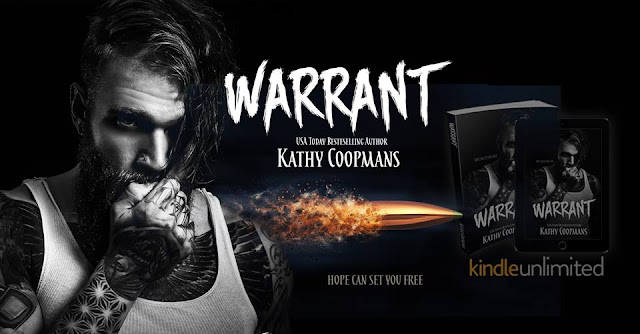 WARRANT by USA Today Bestselling Author Kathy Coopmans is LIVE and on KU! 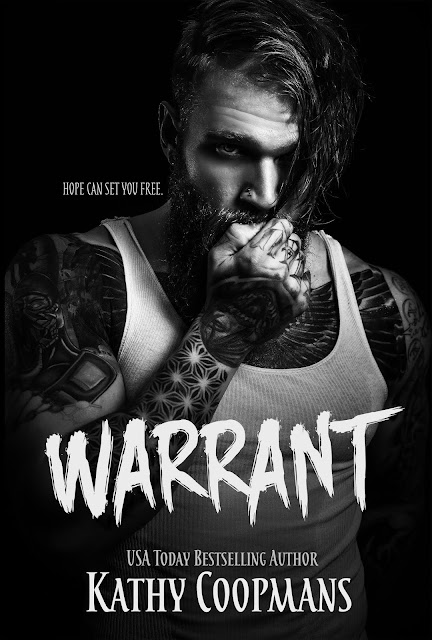 Every wrongdoing warrants a consequence. In my case, I've decided to settle the score with death.
Especially when, what brought this on, what stirred up my crazy, was the vicious attack on an innocent young girl.

Worse, one that ended in her death.

Years, I've been plotting to take out the men I used to call my brothers.

The men who double-crossed me by brutally murdering my sister.

I want revenge. I need it. Crave it. It's in my blood.

I planned to stop at nothing. No matter, if I conflicted pain on another woman.

After all, it was her brother who killed my sister. I figured, why not make him suffer the same way I have.

One tiny glimpse of her changes everything.

Maybe, just maybe, the little siren I wanted to harm is going to single-handedly slaughter me instead.

Warrant:
noun- justification or authority for an action, belief, or feeling.
verb- justify or necessitate (a certain course of action)

Something terrible was done. It warranted a response. The response has been years in the making. Nothing is going to stop it. Nothing, not even the sexy Siren.

Revenge. Justification. Justice. Or peace. However you say it, he is out to get it. She's either with him or against him. Except there never really is a question...

Life hasn't been easy. It hasn't been fair. It doesn't look like it will be either. Everything these men have done to get here has been warranted.

Kathy Coopmans teases us with old friends. Warrant is book two of this series but it can be read as a standalone. Personally, I loved Vengeance and think that you should read it first but push come to shove you can get away without it. What you can't do!?! Avoid the glaring my obvious, someone is going to die. The acts that set this whole plot into motion warrant it.

If you are familiar with the Syndicate series, be sure to smile at the friendly faces. ;) If not, you would enjoy the introduction to Roan and his friends/story. Regardless of your previous "experience," Warrant is going to give you an outlet for the rage you will feel . In my case it was a particularly nasty nail injury...😊 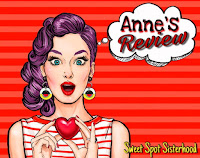 After meeting Chaz in Vengeance i was excited to get to his book however I felt conflicted whilst reading. The pace of the story was hard for me to get into, it would get going action wise and then slow down completel.

Jillian was a character I liked but didn't fall in love with. At times she just infuriated me so much yes i know she had her reasons but it didn't stop me wanting to give her a shake. Chaz on the other hand was fascinating. His internal battles between right and wrong, revenge and love made me fall for him.

Catching up with the guys from previous books made me smile. These books are a fantastic addition to the Mafia genre with a darker edge than some.

Check out the trailer for Warrant! https://youtu.be/Nz_S4PPW2ZQ


Text KCoop to 21000 for sales and release notifications! 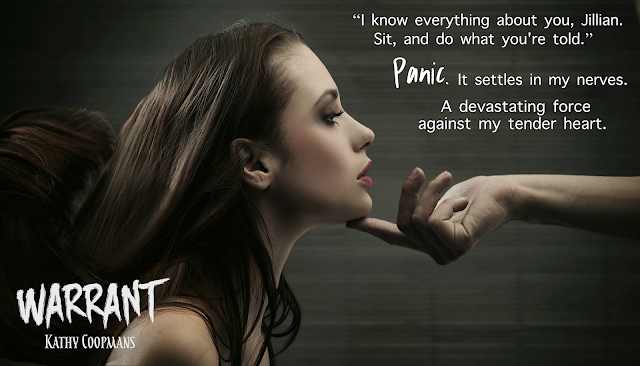 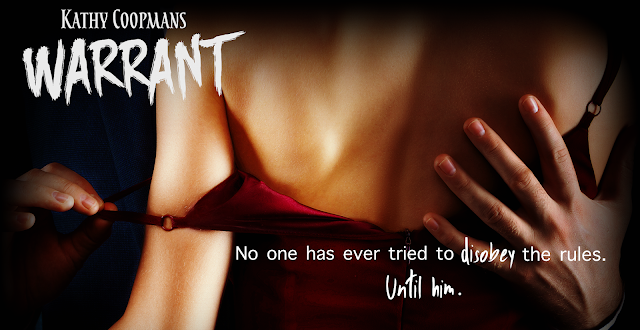 MEET THE AUTHOR:
USA Today Best Selling and multiple Amazon top 100 Author Kathy Coopmans is a Michigan native where she lives with her husband, Tony. They have two sons Aaron and Shane.

She is a sports nut. Her favorite sports include NASCAR, Baseball, and Football.

She has recently retired from her day job to become a full-time writer.

She has always been an avid reader and at the young age of 50 decided she wanted to write. She claims she can do several things at once and still stay on task. Her favorite quote is "I got this."