#NewRelease #Review SOMEONE LIKE YOU by Alexandra Silva @InkSlingerPR @alexsilvaauthor

Alexandra Silva’s Someone Like You is out now! Check it out and be sure to grab your copy today!!

Dorian Anson is my friend. She's the only person who's ever questioned my smiles. My jokes. The one liners that have our friends shaking their heads at me. I've lived my life on those smiles. They never failed me, until her. I wasn't counting on her when I designed my front. I never imagined the possibility of someone like her coming into my life. The wild hair, the kind smile and those eyes that see everything. She was the girl with the beautiful soul, pretty face and whole heart. But hearts aren't made to stay whole. I watched hers break. I watched her tears fall. I watched as her world tilted on its axis and shattered at her feet. This girl. She sees me, all parts of me—the truths I try to hide, the secrets I bury. What's mine and what's not. She sees it all, and I can only hope the truth isn't too much. That she won't walk away. That she won't leave me...alone. We both have a past. We have ghosts. We have fears. I'm hoping that somehow in the end, we'll have each other too. I've never needed anyone before her, and I know I'll never want anyone else after her. There is no one like her. My pretty girl. Dorian.

A look at NO ONE BUT YOU (Imperfect Hearts #1) 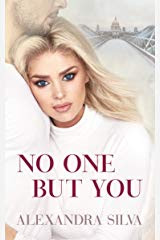 I made a mistake. I kissed the right boy, but married the wrong man.
They were friends. Best friends. Until my life fell apart.
Everything changed.
Something was stolen and then something was given in its place.
I had so much in my grasp, maybe it was too much because everything started slipping.
My son.
My husband.
My sanity.
Only one thing remained the same.
My first crush.
My first kiss.
My first love.

They say you can’t miss what you’ve never had.

But I swear I had her. At least for one kiss.
I left the right girl and tried to replace her with the wrong woman.
It didn’t work because I still missed her.
I promised my best friend I’d always look after his little sister. And our other best friend promised to never break her heart.
He lied.
I didn’t.

We have circled each other all our lives but our time never came.
We’ve never had our moment until now.

Also, check out Alexandra's FOR YOU (Imperfect Hearts #2) while it's FREE for a limited time!

Get FOR YOU now!

Alexandra Silva is a lover of words and romance. She blames the classics and a nutty English teacher for her obsession with books and fiction. Come rain or shine with either coffee or wine in hand you can find her with her nose stuck in a book and her head in the clouds. She lives in London outnumbered by her very loud boys, with her very own hero and their two wild cats--Jack and Jill.

a Rafflecopter giveaway
Posted by Sweet Spot Sisterhood at 8:00 AM