I am selfish. Spoiled. A single father. I do what I want because I can. One of my four sons is dating the hot, young little neighbor… Too bad it won’t last long. When I want something, I take it—even if it means taking from my son. My name is Eric Pearson. I am an unapologetic, egotistical, domineering man. People may not like me, but it doesn’t stop them from wanting me.

I thought this author couldn’t shock me anymore with her characters but I was wrong so wrong. There are no words to prepare you for Eric Pearson, just buckle up and get ready for him.

When Eric sees something he wants he really doesn’t care who he has to step over to get it, loyalty even family loyalty doesn’t exist for him. He’s like a spider spinning its web and Rowan is the prey.

A deliciously filthy sexy taboo journey, it’s a shame you couldn’t see my face cause I’m sure my eyes were as big as saucers. I’m like no no way did he just do that and but he’s ..,. and she’s .... It was a story I couldn’t put down.
All the books in this mini series have become my guilty pleasure, each one has increased in intensity and with only one to go I can’t wait to see what the next author has in store.

But even if you hate him, Eric is definitely magnetic. He has a way of pulling you in. Pearson maybe book 3 but it's definitely an attention stealer...well until you read Wheeler.

I read book 4 first which is a major no-no because of the spoilers. But I think in my case it was gasoline on a fire. And boy did that mother fluffed burn!!!

One intense, sexy, thrilling ride from beginning to end!

These books were designed so you can read them out of order. However, they each interconnect and would be best enjoyed by reading them all! 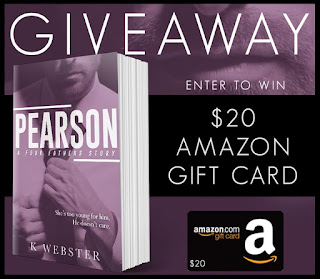