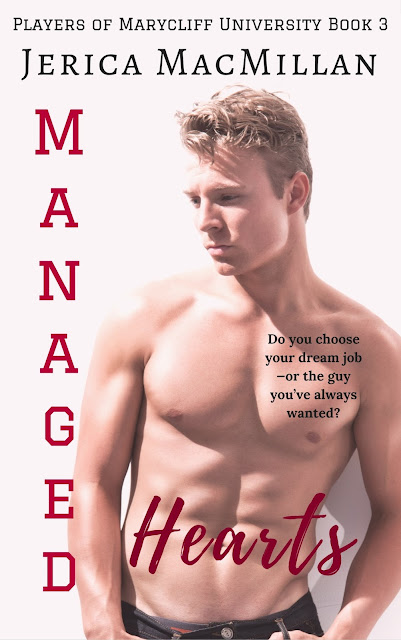 Matt graduated in December after his final football season, and is now working a desk job. Having spent his whole life as an athlete, the day to day grind chafes at him. All his friends are moving on with relationships and pursuing their goals while he’s left as the third wheel. And despite his reputation as a player, he’s the only one who ever wanted a girlfriend.

And then Hannah Glover shows back up in his life—the girl who simultaneously made him want a relationship and ruined him for anyone else without him even realizing it. He wants her now more than ever, but she doesn’t trust him after the way he ended things before. Which should be fine since he’s her manager at his first job out of college, and their company has a strict no fraternization policy. But Matt just can’t seem to help himself where she’s concerned. And she won’t be an intern forever, right?

His hands traveled up her arms to cup her jaw and the base of her skull, tilting her head up so he could touch his lips to hers. A brief touch, so light that she almost questioned whether it actually happened. From the look in his eyes, she’d expected to be devoured, but instead, he touched her lips with his again. And once more before pulling back to look down into her face. “Are you still cold?” His voice came out as a rasp.

“Yeah.” Hers was breathy and soft, too. He nodded, pulling her with him toward the couch, settling her with her back against the arm and her feet in his lap. He slipped her shoes off, then pulled the blanket over her. His hands enveloped her right foot, one hand cupping the heel, the other wrapped around her toes, hot against her chilled skin. “Holy shit, your feet are freezing.”

A snort escaped before she could stop it. “I know.”

He smiled back, kneading the balls of her feet with his thumbs.

She let out a wordless moan. His fingers felt so good, strong and sure as they coaxed warmth back to her icicle toes. His eyes met hers, dark with lust, the light blue just a rim around the black of his pupils. His smile turned wicked, and she became aware of the hardness pressing against her other ankle. Heat rose in her cheeks, and his smile only grew bigger. He shifted his attention to her other foot, picking it up so that it didn’t press against his cock anymore.

After massaging and warming her foot, he worked his way up her calf, squeezing the muscle, his thumbs stroking and caressing her skin, warming her legs too. When he reached her knee, he moved her leg to the side, pushing the blanket off her so it slid to the floor, moving between her legs into the opening he’d created. She let him, enjoying the way his hands felt on her too much to stop. She sucked in a breath as his hands continued their way up, one on each leg, slowly moving and caressing their way from her knees to her thighs, spreading them further apart, raising the hem of her skirt until it barely covered her thong, his face intent as he watched the path his hands made. He lowered himself, lining up his pelvis with hers, resting between her thighs, before raising his eyes to hers and kissing her deeply. He took his time, his tongue sliding and stroking against hers.

His hands skimmed up under the sweatshirt, and he sat back to peel it off her. She sat up as well, raising her arms to help. Out of the cold and now with his weight on her and his tongue in her mouth, she was getting too warm, feeling suffocated by the sweatshirt, its thickness an unwanted barrier. His eyes traveled over her, taking in the swell of her cleavage where it rose under the square neckline of her black dress. He traced a finger along the edge of the fabric, and her nipples hardened even more, like they were reaching out for him. 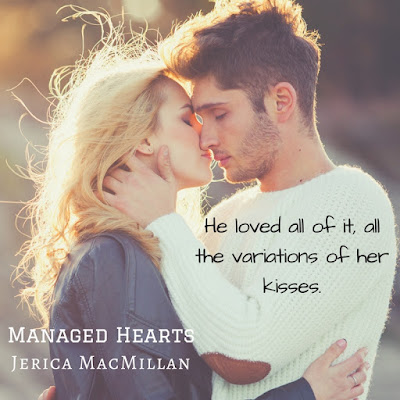 
Also in this Series


Sleeping with your roommate is a bad idea, right?

Jerica MacMillan is a lifelong reader and lover of romance.  Nothing beats escaping into a book and watching people fall in love, overcome obstacles, and find their happily ever after.  She was recently named a semi-finalist in Harlequin’s So You Think You Can Write 2015 contest.

Jerica is living her happily ever after in North Idaho with her husband and two children.  She spends her days building with blocks, admiring preschooler artwork, and writing while her baby naps in the sling.

Join her Book Club at www.JericaMacMillan.com and get a free book!
Posted by Sweet Spot Sisterhood at 3:56 AM