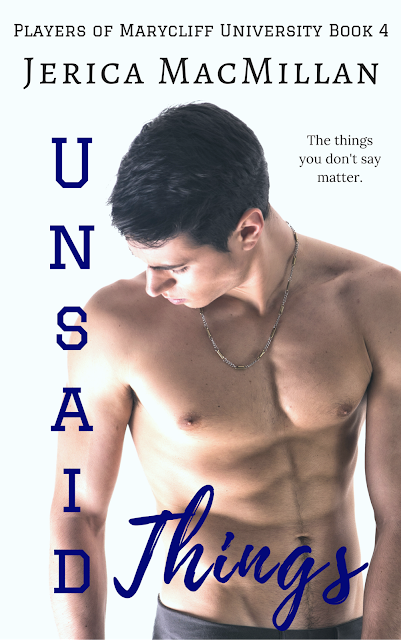 The fourth installment in the Players of Marycliff University series follows the developing relationship of Lance and Abby from Summer Fling.  It’s a story about family, trust, and where you should turn when life gets messy. If you’re looking for a hero you can swoon over and make your next book boyfriend, one-click Unsaid Things now!

“Lance.” His name came out a gasp, and she felt him smile against her skin, but he didn’t let up. Instead, his hands moved to the button of her jeans, which he undid before she registered what he was doing. He tugged her pants down along with her panties, his hands now going to her ass, his fingers reaching between her thighs, teasing and stroking, but not where she wanted. She tried to widen her stance, but her jeans around her knees wouldn’t let her, and she whimpered her distress.

The low chuckle that came from Lance’s throat told her he knew exactly what he was doing. But he didn’t torture her for much longer. Wrapping his arms around her, he lay back, taking her with him onto the bed, rolling them so he was propped over her, kissing her mouth again, his hands caressing every inch of naked skin he could reach.

Abby kicked off her jeans, spreading her legs for him, sighing in relief when he rubbed her there at last, dipping inside her and spreading her wetness around her clit in lazy circles. Sometimes things started out slow and languid, but by the time they got naked, it turned into fierce, driving hunger. Not tonight. This was about connection and love, reassurance that they were still okay in spite of all the outside forces currently conspiring against them. One shining moment that Abby knew she would hold inside her to keep her grounded when things with her family got overwhelming. And they would. Soon. 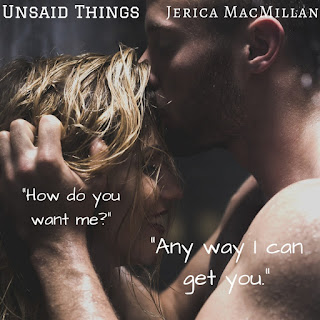 Other Books in this Series


Do you choose your dream job—or the guy you’ve always wanted?

Three years ago Hannah met a sexy surfer while on vacation in Westport, WA.  After a whirlwind summer romance, he ghosts.  She’s tried to move on, but no other guy has ever measured up.  And now she comes face to face with him on the first day of her new internship.  To make matters worse, he’s one of her managers, and he has no idea who she is.

Matt graduated in December after his final football season, and is now working a desk job.  Having spent his whole life as an athlete, the day to day grind chafes at him.  All his friends are moving on with relationships and pursuing their goals while he’s left as the third wheel.  And despite his reputation as a player, he’s the only one who ever wanted a girlfriend.

And then Hannah Glover shows back up in his life—the girl who simultaneously made him want a relationship and ruined him for anyone else without him even realizing it.  He wants her now more than ever, but she doesn’t trust him after the way he ended things before.  Which should be fine since he’s her manager at his first job out of college, and their company has a strict no fraternization policy.  But Matt just can’t seem to help himself where she’s concerned.  And she won’t be an intern forever, right?

Will he be able to convince Hannah to give them another shot?  Or will their past and their present conspire to keep them apart?

Jerica MacMillan is a lifelong reader and lover of romance.  Nothing beats escaping into a book and watching people fall in love, overcome obstacles, and find their happily ever after.  She was recently named a semi finalist in Harlequin’s So You Think You Can Write 2015 contest.

Jerica is living her happily ever after in North Idaho with her husband and two children.  She spends her days building with blocks, admiring preschooler artwork, and writing while her baby naps in the sling.  Join her Book Club at www.JericaMacMillan.com and get a free book!
Posted by Sweet Spot Sisterhood at 4:18 AM