ONE WEEK until the release of Phoenix by Cecilia London. The saga continues with Jack and Caroline's story! @AuthorCLondon 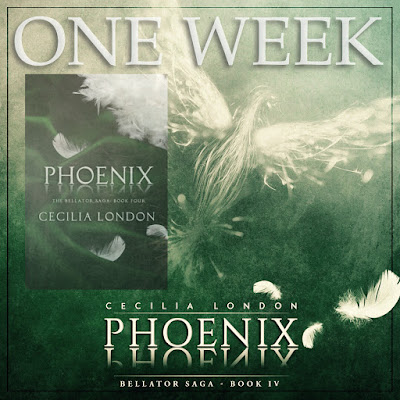 ONE WEEK until the release of Phoenix by Cecilia London. The saga continues with Jack and Caroline's story! @AuthorCLondon
Synopsis:

One epic love. Two wounded souls. Three impossible words.
Ripped away from each other by circumstances beyond their control. Reunited in a place they never expected. Separated but never quite apart.
“You’re still the only woman I see. The only woman I need. I know you’re in there somewhere, sweet Caroline. We’re going to find you and we’re going to help you, until you come home to me where you belong. Then we’re going to finish what we started. Together.”
Her confidence shattered, Caroline finally starts to deal with what happened at The Fed. Jack is determined to convince her that she’s more than she thinks she is. That she wasn’t destroyed by her experiences. That their relationship is worth the fight. But will he give up before it’s too late?
Phoenix is the fourth installment in The Bellator Saga. It should be read after the first three novels in the series.FB Group:https://www.facebook.com/bellatorsaga/?fref=ts