[Chapter Reveal] JUST LIKE THAT by Nicola Rendell @AuthorNRendell @ArdentPRose 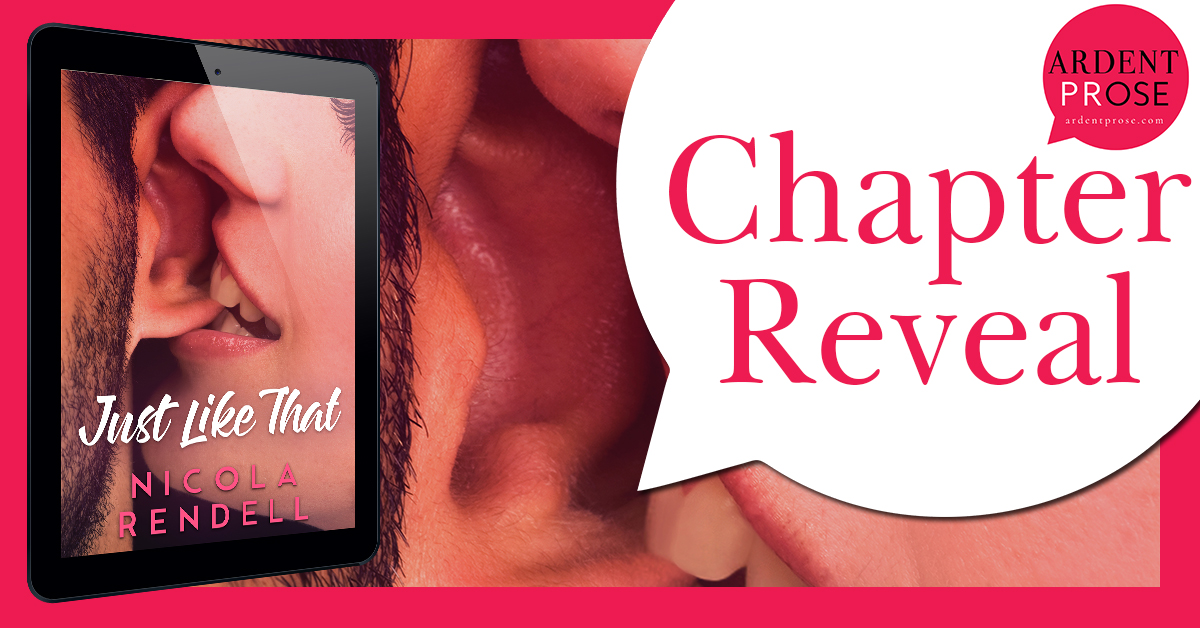 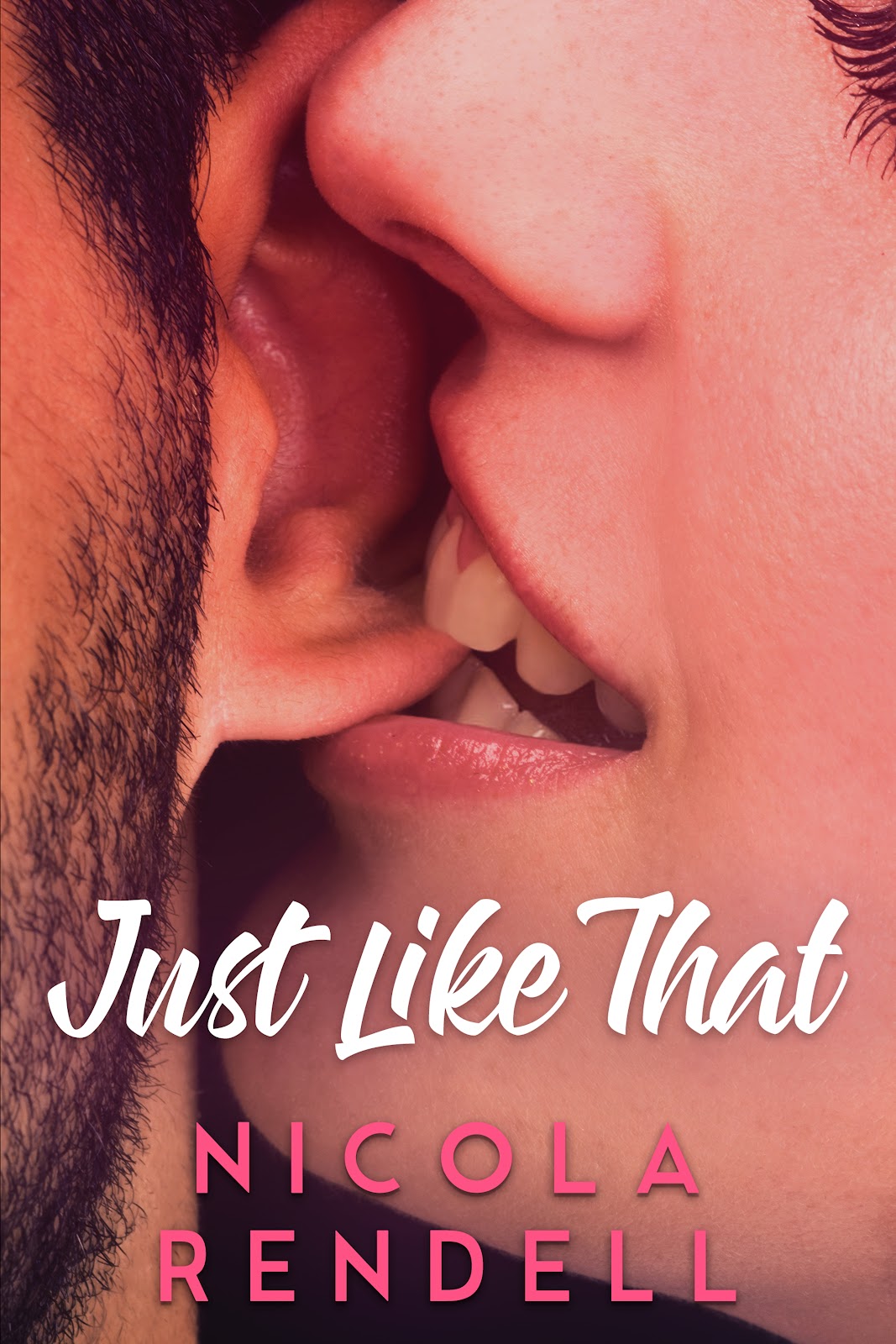 "I bet I can untangle you."
At an airport baggage claim, Penny Darling looks up from her knotted mess of ear buds to find the sexiest hunk of man she's ever seen. He's got a military haircut, a scar through his eyebrow, and he's rocking a pastel pink dress shirt like only a real man can. But Penny is on a man-free diet so she leaves the airport without succumbing to his delicious double-entendres...or his dreamy dimples.
PI Russ Macklin can't take his eyes off Penny. As she sashays out of the airport with hips swaying and curls bouncing, he suspects they may share more than just sweltering chemistry. That suitcase she's rolling along behind her? It looks a lot like his.
Because it is.
When he tracks her down, he holds her bag hostage in exchange for a date. Their night begins with margaritas and ends in urgent care, and Russ proves that Cosmo's theory about a very particular type of orgasm was oh-so-wrong.
In Penny, Russ finds a small-town sweetheart with a very naughty side. For the first time ever, he’s thinking about picket fences. Penny finds in Russ a loving, caring man who understands the power of massaging showerheads.
But Russ is only in Port Flamingo for a week. They agree it'll be a fling and nothing more. Because really, they can't fall ass-over-teakettle in love just like that...
Can they?

It was. Twenty minutes later, I’m the only guy standing by the carousel, and there’s a single black bag going around and around in front of me. It’s exactly the same as mine, except it’s overstuffed and has a pink puff of yarn tied to the handle. Same color as her bikini top and literally hanging by a thread.
It slides to a stop, and the yarn ball swings off the side of the carousel. Tick-tock, tick-tock.
A rattle from the center of the conveyor sounds promising—I was early connecting through Atlanta, so my bag had to be the first one on—but no dice. What comes off the conveyor isn’t a bag at all, but instead one of the baggage guys in big set of protective earphones and a reflective vest. He crawls up through the flap and pokes his head out. He wipes his forehead on his bare leathery shoulder and then looks from me to the bag and back again. “Nice pom-pom, man,” he says and backtracks down the hole.
I glance around for some airport help on this, but all I see is a handwritten sign at the baggage claim desk. Will Return On Monday!
It’s Saturday.
Christ.
As I take hold of the bag, I notice it’s got not one but three “LIFT WITH CAUTION” tags: the first one new, the second one beat up, and the third one halfway shredded, all together the way people keep lift tickets from ski areas. I give it a hoist. The thing is so heavy it makes me grunt like I’m doing a dead lift. With a two-handed lug, I yank it off the conveyor and set it on the ground, wheels down.
Squeezing the roller handle, I pull it up…and it snaps off right in my hand. The arms stick up from the suitcase like the tines of a fork.
I clench my eyes shut and think back to “the most helpful critical review” from Amazon. “Looks like every other bag on the planet. Sh**ty handle.”
Touché. But it is what it is. Which is her bag, hopefully.
I wheel it along to a bank of benches, by some old beat-up phone booths, lining the far wall. I open up the ID pouch and read:

I bite down on my gum and groan. How cute is that name? Jesus Christ, come on. Penny Darling. What’s more, it’s not a business card or typed up like mine, but written by hand. Her writing is sweet, pretty, and feminine, with big plump letters written in bright pink marker that’s bled into the plastic cover, so they’ve got a haze around them like neon lights. And there, at the bottom.
Her number.
Jackpot.
It might not be my smoothest move, but I’ll take it. I pull my phone from my pocket and give her a call. As I wait for the ringtone, I decide to hell with suave and understated. I want her, and I need her to know it.
But then in my ear I hear, “Mobile Network Temporarily Unavailable.”
Goddamned Verizon, jamming up my plans. So I try to text her instead.

This is Russ.
From the airport.
I've got your bag and I think you’ve got mine.
How about that drink?

I hit send, and I’m answered immediately with a row of red exclamation points and four repetitions of NOT DELIVERED. What. The. Fuck.
Then I noticed my cell service flips over from 1 bar, to Roaming, to Searching for service…
I pull my hot pack of gum from my sweaty pocket and take out a second piece. The gum is weirdly melted even before I put it in my mouth.
The options now are pretty simple: I could touch base with the guy who hired me to come down here to the land that Verizon forgot or…
I think about those tan lines, the curve of her hips. That bikini. The glisten on her rosy lips. The way she wrinkled her nose when she smiled.
Why is this even a goddamned question? It’s four o’clock on a Saturday. A beautiful woman is on East Beach Point Drive with all my stuff. And somewhere in this town, I’ll bet there’s a beachside bar with a pitcher of margaritas with our names on it.