I'd dated his brother.

He didn’t remember and I wish I could forget.

I may have sworn off the Wright family a long time ago. But when I returned home, Jensen Wright crashed into my life with the confidence of a billionaire CEO and the sex appeal of a god. Even I couldn’t resist our charged chemistry, or the way he fit into my life like a missing puzzle piece.

Too bad he’d forgotten the one thing that could destroy us.

Because Jensen Wright doesn’t share. Not with anyone. And if his brother finds out, this could all go down in flames.

When it all was said and done, was he the Wright brother?

To Emery, the Wrights might as well be hostile aliens attempting world domination. Well maybe...minus the world domination and instead of hostile, just not speaking the language kind of irritation. Another words, if she ignores them they aren't really there. If only that were true!

Jensen sees the incredible woman. He knows he needs to have her, talk to her, convince her. Right after he gets her name!

Emery knows it will never happen. She dated his brother. So googly eyes, hot kisses, and amazing chemistry don't matter, right? It's too much. Or is it too late?

Family drama, trust issues, and chemistry make a volatile situation a whole lot crazier! These two deserve each other. But will it really happen?

After a betrayal Emery moves back home she's at a turning point in her life, she's not happy and knows she need to make some changes. Her friend drags her to a wedding that she really doesn't want to go to. Emery used to date one of the Wright brothers and wants to avoid him but in the church she catches the eye of a man in the wedding party. Jensen is intrigued by the woman but he doesn't recognize her as his brother's ex.
I really enjoyed this story, it's a fun read with lots of family drama and angst. The chemistry between the two main characters is intense and there really belong together but will the past that impossible.
This family is going to be like the gift that keeps on giving because you cons tell that they all have their secrets and a story to tell.

We have all had those situations in life where it just isn't fair. We wish something in our past never happened because the thing in front of us is unreachable because of it. Even when the stars align and everything seems perfect you still get all the drama from the past. It just isn't fair. This story is all of that and so much more. Emery dated the wrong brother first and it didn't go down well. The brother who is in her life now seems to be perfect and the chemistry is off the charts but will it ever go anywhere when she remembers the past even tho Jensen doesn't. Others remember and this story gives you everything you need to keep wanting more.

This review of The Wright Brother by KA Linde is for The Sweet Spot Sisterhood. If you like a laid back romance then this book is definitely for you. Sometimes as a reader this is just what you need and I definitely needed this sweet slow burn romance. It had me hooked from the very beginning and I didn't want to put it down. I fell in love with both the main characters. I loved the dual POV. I actually prefer that over a single POV. I like knowing what is going on in both their heads.

The Wright Brother is the story of Emery and Jensen. Both Emery and Jensen have been burned in past relationships so they are reluctant to start anything. Emery was just cheated on and quits her PhD schooling and moves back home. Jensen has been married and divorced and runs his family's construction company in Lubbock, TX. Oh yeah, did I mention that Emery dated Jensen's brother 10 years ago? There are things they don't know about each other, but will their secrets/pasts catch up with them before they have a chance to share them with each other? In a town where you can't even sneeze in church without everyone finding out, the odds aren't in their favor. Is this just a fling or does it turn into something so much more? You'll have to read to find out.

I also cannot wait for The Wright Boss, which is an interconnected standalone about Emery's friend Heidi and Jensen's brother Landon. Did I mention that he is also Emery's ex. 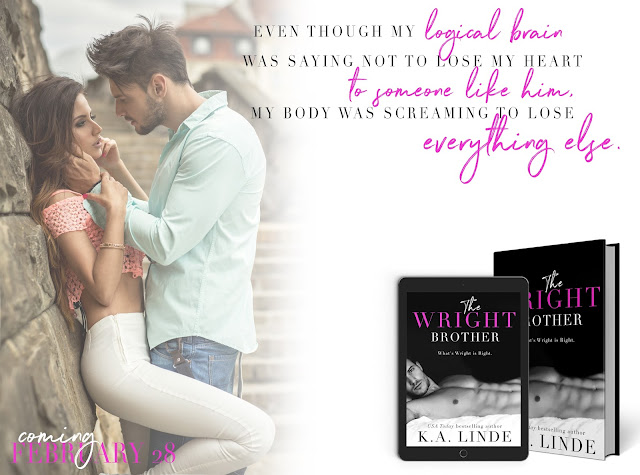 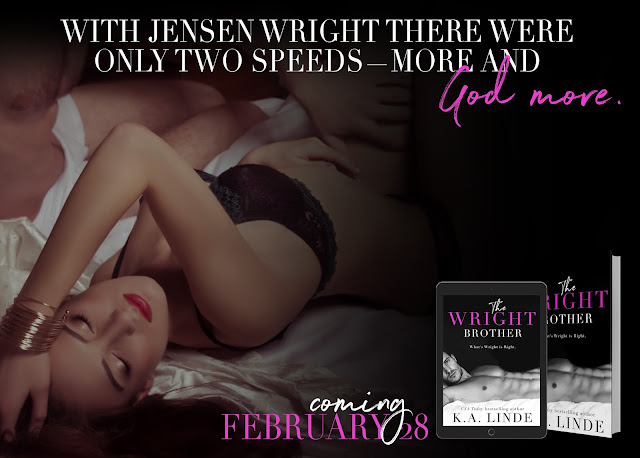 K.A. Linde is the USA Today bestselling author of more than fifteen novels including the Avoiding series and the Record series. She has a Masters degree in political science from the University of Georgia, was the head campaign worker for the 2012 presidential campaign at the University of North Carolina at Chapel Hill, and served as the head coach of the Duke University dance team. She loves reading fantasy novels, geeking out over Star Wars, binge-watching Supernatural, and dancing in her spare time. She currently lives in Lubbock, Texas, with her husband and two super adorable puppies.