[Release Blitz * Review] OWN IT by M. Dauphin @AuthorMDauphin 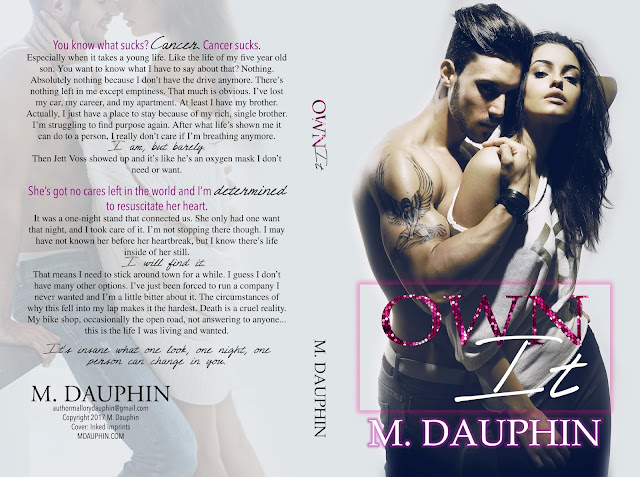 Synopsis
You know what sucks? Cancer. Cancer sucks.
Especially when it takes a young life. Like the life of my five year old son. You want to know what I have to say about that? Nothing. Absolutely nothing because I don’t have the drive anymore. There’s nothing left in me except emptiness. That much is obvious. I’ve lost my car, my career, and my apartment. At least I have my brother. Actually, I just have a place to stay because of my rich, single brother.
I’m struggling to find purpose again. After what life’s shown me it can do to a person, I really don’t care if I’m breathing anymore.
I am, but barely.
Then Jett Voss showed up and it’s like he’s an oxygen mask I don’t need or want.
She’s got no cares left in the world and I’m determined to resuscitate her heart.
It was a one-night stand that connected us. She only had one want that night, and I took care of it. I’m not stopping there though. I may have not known her before her heartbreak, but I know there’s life inside of her still.
I will find it.
That means I need to stick around town for a while. I guess I don’t have many other options. I’ve just been forced to run a company I never wanted and I’m a little bitter about it. The circumstances of why this fell into my lap makes it the hardest. Death is a cruel reality. My bike shop, occasionally the open road, not answering to anyone... this is the life I was living and wanted.
It’s insane what one look, one night, one person can change in you.

This is an emotional read. No way around that but it's also a beautiful story. The author knows how to write a story that grips your heart and characters that will stay with you. Lo has been dealt a hard hand in life and she has let it get to her, I would be the same way, but will she be able to let herself open up when she meets Jett? Jett is the bad boy of his family but once he meets Lo he has a mission to make her alive again. These characters were written so beautifully and you can't help but feel the emotions that drop off the pages. Get some tissues ready and enjoy this emotional but also story of hope. Sometimes we get what we never knew we needed when we least expect it.
Reviewed for Sweet Spot Sisterhood

We meet Lauren or Lo as she likes to be known at the lowest point in her life and when you find out why you won't blame her at all. Her emotions are raw and displayed to devastating effect by the author, she's hurting and is literally doing the bare minimum to get through each day.
She's living with her brother and when she attends a funeral with him she meets Jett, it was fate they met that day because they are just what each other needed. Jett is the rebel of his family when he see's Lo he's hooked, he loves her wild unapologetic nature and the chemistry between them is red hot.
This is a very emotional story, it's a story of hope and strength of never giving in and finding that one person who sees beneath your outer shell to the heart of you. Lo and Jett are an amazing couple and their story will stay with me.
Reviewed for Sweet Spot Sisterhood 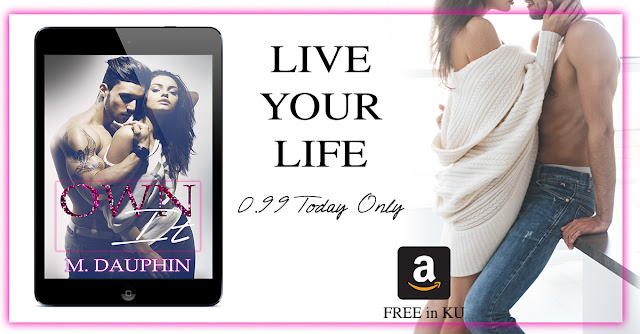 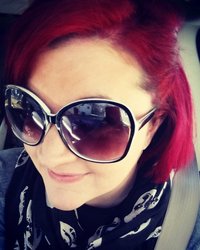 An avid, self proclaimed closet book nerd by the age of nine, Dauphin didn’t take her love of fictional worlds public until she self-published her first book almost 20 years later. Since putting to paper the voices in her head, she’s fallen in love with a career of building, ruining, and rebuilding fictional character’s lives. Currently, she has self published two series, two full length novels, and two full length co authored books she’s written with her other half HQ Frost, as well as been involved with two anthology sets. Her love will always reside with the romance genre, but she does enjoy going off the grid every now and then with non-fiction.
From Southern Illinois, born and raised, she now resides with her husband, two small boys, and two very busy dogs.
If you friend her on Facebook, you’ll be subjecting yourself to a whole lot of awesome…. So what are you waiting for?! you want to see what she has to offer (and some hot guys, too) and if you want to chat, email her here: authormallorydauphin@gmail.com