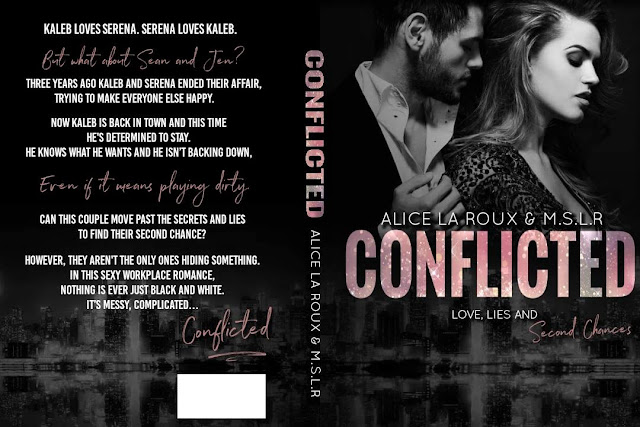 But what about Sean and Jen?

Three years ago Kaleb and Serena ended their affair, trying to make everyone else happy.

Now Kaleb is back in town and this time he's determined to stay. He knows what he wants and he isn’t backing down, even if it means playing dirty. Can this couple move past the secrets and lies to find their second chance?

However, they aren't the only ones hiding something. In this sexy workplace romance, nothing is ever just black and white. It’s messy, complicated… conflicted.

Alice La Roux is a dirty minded, mouthy Welsh author with an English Literature degree who is still trying to find her genre while dabbling in erotica, fantasy, and horror. She’s a bookworm who reads anything and everything and is addicted to social media.

Find her on Twitter or see random pictures of her dog and wine over on Instagram @AliceLaRoux. Feel free to add her on Facebook, she doesn’t bite…much.

M.S. L.R., lived in Los Angeles, California for eight years, then moved to Arkansas and has been living there ever since. She graduated Springdale High School in 2007. Currently, she has a full-time office job and has two boys that keep her busy when she’s not at work or writing romance stories.
She loves to read, write, read and write!
Author M.S. L.R. has also published under Stefany Rattles.