To the outside world, seventeen-year-old Kyle Stone has it all. A future playing the sport he loves, money and status, and his forever girl by his side. But Kyle’s good at pretending; hiding what he doesn’t want others to see. Because Kyle has secrets, the kind that can change everything.

Pretty, popular, and dating one of Wicked Bay High’s rising football stars, Laurie Davison is living the life most girls only dream about. But behind closed doors, she feels like a fake. Keeping up appearances is exhausting, and the one person she should be able to turn to is the person pushing her away.

They say love conquers all, but lies destroy. And when the truth comes out, hearts don’t only get hurt.

Note: Wicked Lies can be read as a standalone but will be better enjoyed when read in series order

This is the 3rd book in the series and although it could be read as a stand-alone I would recommend reading the others so that you get a good grasp on the group dynamics.

I love these guys a group of friends who have become a family. So this is Kyle and Laurie’s story and I’ll admit I had reservations about Laurie beforehand but I should have had faith that the author would do the characters justice.

The story focus is Kyle who’s life has started to spiral out of control and how the secrets he’s keeping impact on not only his relationship with the love of his life but his friends and family.

Wicked Bay and it's lies. At some point the truth had to come out...What a spectacular mess it all is! I have loved Kyle since the beginning. Not only is he sweet but he's also kind, caring, and loyal. He is the glue for the Stone-Prince kids and company. He's the funny, dependable, best friend. He's the loving, happy, helpful one. So this mess, this situation, makes it more brutal than ever. It is deep. The lies and the pain aren't going to be glossed over. And a lot is at stake...

If you thought it was going to be rainbows and unicorns for the Stone-Princes, think again. Lies have a way of being unraveled and truths being told. In a small town...it's worse. Wicked Bay is intense and Wicked Lies will rile you up. Nothing like some lies to test your bonds.

This series is like eating M & M's. You buy the 4lb. bag because its cheaper and you're thrifty like that. You sit down and say just a handful. Hours later you're in a sugar coma with maybe a handful left and funky colored drool running down your face. (No judgement from me.) You've devoured it all and you feel joy, happy, sad, and even remorseful. Because now you can only wait for the next installment...It's okay though. I peeked in the back and it says Wicked Games for this Summer so...it won't be long. 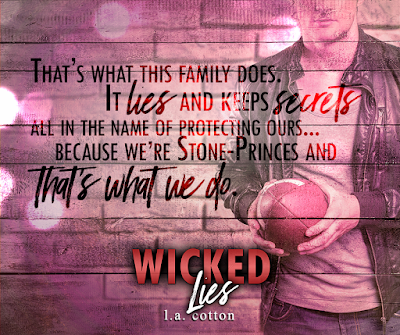 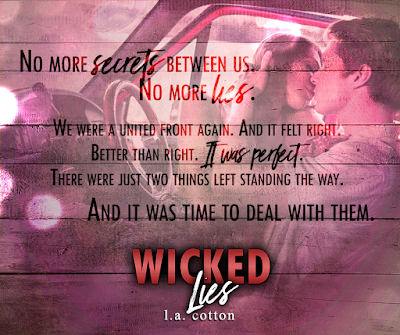