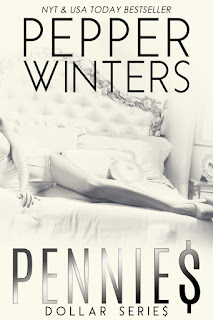 “At 23 I had dollars, but life changed and made me rich. At 25 I had hundreds, but it wasn’t enough to stop my killing itch. At 27 I had thousands, but my reputation didn’t set me free. At 29 I had millions, but I met her and could finally see.”

Tasmin was killed on her 18th birthday. She had everything planned out. A psychology degree, a mother who pushed her to greatness, and a future anyone would die for. But then her murderer saved her life, only to sell her into a totally different existence.

Elder went from penniless to stinking rich with one twist of fate. His lifetime of crime and shadows of thievery are behind him but no matter the power he now wields, it’s not enough. He has an agenda to fulfill and he won’t stop until it’s complete.

But then they meet.

A beaten slave and a richly dressed thief. Money is what guided their separate fates. Money is what brought them together. And money is ultimately what destroys them.

She was poor.
He was rich.
Together…they were bankrupt.

**Please listen to the authors warnings this is dark very dark do not buy if that's not your thing.

To avoid spoilers I'm not going to go over the story, I'll just tell you what I felt.
From the first page, I was hooked. I stayed up till 2am reading. I just couldn't put it down. There are characters I hated with a passion, one that I was unsure of, but oh, did I come to love and one who my heart broke for... I have so many theories and questions that I know Pepper will drip slowly into the books that are to come and I really can't wait.
Don't compare it to Pepper's other books. Go in blind with an open mind and get ready for a story unlike any other!
** Reviewed for Sweet Spot Sisterhood Blog **

This book is completely enthralling and intriguing from the first page. Tasmin finds herself in a new world, unlike anything she ever pictured for herself. Alrik is the monster who knows no end. And Elder can be a savior or the new evil! This book is dark in every sense. This isn't about a girl who falls in love with her captor. Pim finds ways to overcome the hand that has been dealt but can she survive it all in the end? This book has a cliffhanger that makes you want to scream. I cannot wait for the next book. Pepper Winters knows how to captivate your mind and hold it for ransom. I don't want to give any spoilers so I will leave this review with my advice to read this amazingly dark book.
*Reviewed for Sweet Spot Sisterhood*

This book has a warning for a reason. It is not for the faint of heart. It is a very dark romance. It is nothing like I have ever read before. Pennies is book 1 in Pepper Winter's new Dollars series. It tells the story of 18-year-old Tasmin Blythe. One minute she is a carefree teenager headed off to a charity event and the next she is being murdered only to be brought back to life and abducted. She is then given a new name, Pimlico, and sold to the highest bidder, a man named Alrik.

I would love to tell you that this is the part where they fall madly in love and live happily ever after, but this isn't the case. This is a dark romance after all. Alrik buys Pimlico as a sex slave. He is a very sick and sadistic mandate and her life is made a living hell. She is forced to remain naked, beaten, raped, starved and even shared with Alrik's friends. She tries to no avail to escape this white fortress. She even contemplates suicide as a means to an end. Through all this, she shows such tremendous strength and endurance. There is one this she has never given/relinquished to Alrik or his friends, her voice. Throughout her two years in captivity, she hasn't uttered a single word. It is the one thing he will never take from her. Pimlico finds her voice in writing to No One. She tells us her story in diary form written on toilet paper squares. She hides them from her Master, not letting him hear the only voice she has.

One day a man by the name of Elder Prest shows up to negotiate a business deal with Alrik. Alrik makes Pimlico dress for the visitor and warns her he knows nothing about their arrangement. Alrik wants to keep his true relationship with Pimlico in the dark. Pimlico suffers a panic attack that puts Alrik's secret in jeopardy. Elder comes to Pimlico's rescue that night and sees right through Alrik's scam. They form this connection, an unspoken bond. After Elder leaves, Alrik punishes Pimlico because of this.
**Reviewed for Sweet Spot Sisterhood**

Will Elder return for her? What will Alrik"s punishment be and how far will he go? What will become of Pimlico?

*For the rest of the full synopsis, click HERE (Spoilers)