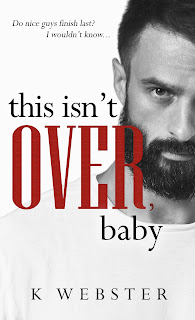 THIS ISN'T OVER, BABY
by K Webster

**THIS IS BOOK THREE IN THE WAR & PEACE SERIES. THIS IS THE VILLAIN'S STORY. PREPARE YOURSELF...

They’d won the battle and I held up the white flag of defeat…
But the war wasn’t OVER.

I suffered the aching loss of what they had stolen from me.
OVER and OVER again, my heart broke.
The white Queen and the black King had taken OVER the game
and ruled for what seemed like an eternity.

Until one day, eternity was finally OVER.

I was the dark knight who would rise again and conquer.
I was the man who would win OVER the most important piece on the board.

A slayer. A protector. A father.
A new king with the blackest of hearts.

And head OVER heels in love with…
The little princess who owned my twisted soul.

Sometimes the villains don’t just want their happy ending…
They demand it.

This isn’t OVER, baby.
This will never be OVER.

Warning:
This Isn’t Over, Baby is a dark romance. Strong sexual themes and violence which could trigger emotional distress are found in this story. This story is NOT for everyone.

Review by Vanessa Renee
5 of 5 stars

Let me start off by saying you must read the first two books. You have to be able to understand Gabe's mind and how he works. I'm all for a bad boy but ohh as you know from the first two books Gabe takes it to a whole new level and we never get any background and why he's so messed up. So yes this book shines a new light on Gabe that made him for me lovable. For me I always try and put myself in the characters shoes and see things from a different view. You must do this with Gabe. You have to look at the world from his twisted mind and fall in love with the way he does things. This book gives you so much that it's so hard to share my feelings without spoilers. And even the smallest spoiler would be upsetting because K Webster does such an amazing job of making your mind work and think outside of the box. Truly open yourself up and think outside of the box. Ohh I just loved this book. It gave so much into Gabe's story but also the rest of the characters as well. I do have to admit this book had me fall for War even more. It is twisted and some parts will shock you. Let me say this Gabe isn't the worst villain in this story, he finds a mate to his madness. This is a love story, even if you can't believe that. I would even go as to say that this love story is my favorite out of the three books. What else can I say other than I love this series and the twisted writing skill of Webster. Your mind will go in a million different directions, your heart will break and be put together just to break again, your emotions will be all over the place. Keep your mind open and enjoy the love story that lets us all know everyone deserves love, even the villains.

There's not a lot I can say without giving the plot away. Sixteen years later we meet back up with Gabe War Baylee and their families, the character who has the most impact is Hannah and let me warn you she is not the sweet innocent daddy's girl. Hannah is not just troubled she is 100% crazy but I loved every bit of her craziness her. If you didn't love him before you will after reading this, believe it or not, a Gabe in love is vulnerable, yes, I said vulnerable ..and protective. It's violent, it's sexy, it's scary but it is one of my favourite books this year.

An amazing addition to the Peace and War series, K Webster has done it again in a gripping, twisted, unconventional love story from the villain's perspective. I purposely avoided the blurb and other talk about this book so that I could go into it blind. It definitely was not what I had imagined and the intensity between the two lovers was so dark and depraved... it was truly a match made in heaven. To help keep this as spoiler-free as possible, I won't go into detail about Gabe's love interest, but she is a handful even for Gabe. Can you imagine? ...Gabe meeting his match? She is quite a handful for him. She makes him vulnerable in a way. They have a twisted way of loving each other, and, oddly, she is better off with him than not. It is the craziest thing ever to realize that. She relates to his roughness, aggression, and depravity. It is almost like her love language. She did not have the messed up upbringing that Gabe experienced. This is just her nature. We do see a somewhat rational side of Gabe. He is also fiercely protective of his own child, which also becomes an issue in regards to his new situation. There is so much I want to be able to say, but I don't want to spoil anything! You must read books one and two before reading this one.

It was so nice to have had one view of Gabe in the first two books, only to get this new first-hand point of view from Gabe. Also, if you were to read this book without having read the first two, you will totally ruin your experience for reading the first two books due to spoilers. So read them in order!


This book is not for everyone. You truly have to think outside the box and see things from the main character's point of view. Do they do things the way we think they should? Hell-to-the-no. But, as you get to know them, you realize that this is a story about their experiences and their world. It all begins to come together. I've never been so unexpectedly happy for a villainous couple like this before and catching myself in those moments when I found myself rooting for them.
~~~~~~~~

Reviewed by Sam Lewis
5 of 5 stars

**Read with caution. May contain spoilers.

This Is Love, Baby left us hanging. At the very end, we learn that Gabe has survived and is living just up the beach from Baylee and War. He is living with a lady named Alejandra, a surgeon, who doctored him back to health. This Isn't Over, Baby is Gabe's story. In true dark romance fashion, K. Webster does not disappoint. We get to dive into Gabe's past and learn why he is the way he is.

Gabe's childhood is quite sad. He was abused sexually by his father after his mother left them. His father was involved in sex trafficking young girls. When Gabe is 17 he joins in and it becomes deadly.

This Isn't Over, Baby picks up 15 years after This Is Love, Baby. Yes, this Gabe's story, but it is also about Hannah. Hannah has a thing for older men. You see where this is going don't you? Gabe and Hannah are cut from the same cloth. Then one night Gabe rescues Hannah after a sexual assault. After that night they form an unbreakable bond.

I absolutely loved this book. Just like the first two I can't get enough. I have never been a fan of dark romances until I read K. Webster. This series has made me a fan. With the ending I hope that K. Webster has laid the groundwork for another book. Just like the title suggests, I sure hope This Isn't Over, Baby! Pun intended.
This ARC of K. Webster's 3rd installment of her War and Peace series was received in exchange for an honest review. Reviewed for the Sweet Spot Sisterhood Blog.
~~~~~~~~


Posted by Sweet Spot Sisterhood at 2:20 AM