Everyone has ups and downs. I’m no different. I’ve had some really amazing ups, but I’ve also had some crap-tastic downs.


When I was four, my biological mother died. I don’t remember crying for her. She’d never been the type to cuddle me, tuck me in, and read bedtime stories. That job was pushed off onto my sister Lana. She did her best to take care of me until Mom died. After the funeral we went to live with our older sister, Layla and I got to see what a real mother was supposed to be like.


When I was six we moved to Malibu for Layla’s new job as the housekeeper to one of the worlds most popular rock bands and their manager. When my sisters told me that we were going to live with Demons I was definitely not looking forward to it. Then I met Nik, Drake, Shane, Emmie and the man that would one day become one of my favorite people in the world. Jesse Thornton.


By Christmas my oldest sister was married to the Demon’s Wings drummer. Six months later they made me theirs and adopted me. The day I became Jesse’s daughter was one of the best days of my life. I felt like I belonged to someone for the first time in my life.


But you know the rules of fate, or at least the rules it feels like those bitches have specifically for me. Something truly amazing always seems to be followed by something really, really shitty. When I was nine, my real dad was released from prison and tried to take me. I still have nightmares about that night.


I got through it, though. My parents sent me to a good therapist, but it was my best friend Harris who really got me through that time in my life. When I couldn’t sleep I would call him and no matter how tired he was he would stay up and talk to me until I would finally fall into an exhausted sleep. He was the kind of friend that one text and he would drop everything for me.

To bad my hormones got in the way of our friendship. At twelve, puberty hit me hard, and the love I felt for my best friend got complicated with a crush. They’re called crushes for a reason, something I’d learned real quick that year. I pushed him away to avoid the agonizing pain that my crush made me feel.

Now it’s been years since I’ve seen him. He’s graduated from college and moved forward with his dream by opening his first club. First Bass is the most popular nightclub in not just Los Angeles, but all of California. I’m so proud of him, but I’ve avoided going to check it out. After an email that twisted my heart into knots I’m finally going to head over there.


Maybe I won’t still be crushing on him. Maybe we can go back to being best friends.

Lucy and Harris grew up together and are best friends but what happens when your feelings change? I loved finding out more about Harris and Lucy's relationship I love all the guys in the band and their stories. Can't wait to see where their novellas go.
**Reviewed For Sweet Spot Sisterhood Blog**

I didn't read the rockers series on the demon wings band so I felt like I might have missed a lot of the background. The way it started off was really odd at first for me because I had no back story. Lucy went through a lot in her life all at once it seems. And then she was blessed with best friend and amazing people to support her in all areas. I think because of her past and insecurities she allowed herself to make foolish rash decisions. Even as she got older she was fast to judge and think she knew it all. I can get the insecure part but I was hoping for her to grow a lil more. Harris is an amazing guy who was from the start. They have a great connection because they shared so much in common, lifestyle wise. He really shows how much he cares for Lucy although at times he lets her alpha male overtake him and his decisions. Overall I fall in love with Harris and can't wait to see what happens with the next novella. It was a fast read that keeps you wanting more. * Reviewed for Sweet Spot Sisterhood *

One kiss can change everything…

I wished I’d known that before I’d kissed my best friend.

Things are different now. We can’t go back. I’m not even sure I want to go back. I guess the question is….

I'm really loving all the twists and turns of Harris and Lucy's relationship now that they are more than friends. The other characters are starting to broaden the story out a couple makes you want more and that ending tore me apart.
** Reviewed For Sweet Spot Sisterhood Blog**

Wow, I thought the first book left unresolved issues. Warning this book leaves a huge cliffhanger! It's so hard to see both sides of the picture in this novella. I want to believe in Harris but I feel like he made such stupid mistakes and started playing games. Lucy and Harris have such a connection it's so hard to read them going through so much crap off and on. I don't want to give spoilers away. I can't wait for the next book since this one literally leaves you hanging off a cliff. The author definitely knows how to capture your attention and keep you coming back for more.
*Reviewed for Sweet Spot Sisterhood *

Blurb
With one promise her life was changed…

Saying goodbye to my mother also meant saying goodbye to my life in Virginia. After reluctantly making a promise to my mom, I was California bound with the father who I haven’t seen since I was four years old. I was miserable living under the same roof as my step-monster and the two step-bitches from hell. My only saving grace? Lucy Thornton, daughter to Demon’s Wings’ drummer, Jesse Thornton. Without her friendship—and her odd rocker family taking me in as one of their own—I was sure I would have lost my mind after the first week.

A blast from her past…

I never thought I would see Jace St. Charles again. Honestly, after the way he’d broken my heart, I would have been just fine without having to see his face for the rest of my life. With Lucy’s close friendship with Harris Cutter, owner of the hottest new club in SoCal and Jace’s new boss, I was forced to see that damn face often. Forced to see the way every girl seemed to trip over themselves to get close to him.

Being tossed into one situation after another with Jace made it hard to fight the fact that I wasn’t as immune to him as I wanted to be. But, damn it, I was only human and he was hell bent on winning me back.

I loved Kin's character she's funny, loyal, determined, strong but she's struggling after losing her mother and having to move which brings her into contact with Jace her first love. Really enjoyed her friendship with Lucy and her step siblings. The story focuses on how she deals with all these changes (and she does it in style ) and her relationship with Jace. I loved that she doesn't give in too easy to him it's funny to watch his confusion on how to proceed. Another great instalment in this mini series.

From the first novella in this series Kin and Jace intrigued me. Even though I'm anxious to know the rest of Lucy and Harris' story I loved this book. I was hoping they would have a book to their own with more to their story. I hate spoilers so I will try to leave them out. Kin was thrown into a life she wants nothing to do with after a tragedy that's left her feeling empty. Her friendship with Lucy was kinship right from the start. She felt like she had people who she could count on. What she never counted on was running into Jace in the city that she didn't want to be in. This story is explosive and heart clenching. I loved it all. I can't wait for the next book to not only see what happens between Lucy and Harris but to see how Kin and Jace are doing. * Reviewed for Sweet Spot Sisterhood * 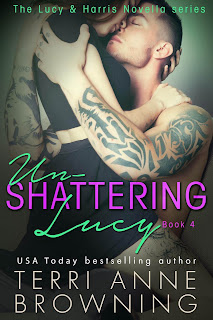