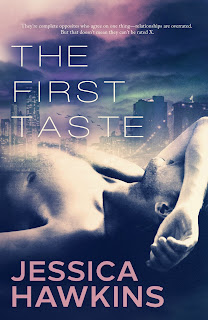 THE FIRST TASTE
by Jessica Hawkins

BLURB
Andrew Beckwith has already devoted his life to one girl—and as far as he’s concerned, she’s all he needs. The rough-around-the-edges bad boy left his reckless ways behind six years ago when his daughter Bell was born. To the female population’s dismay, he’s unapologetically single. When Bell’s mother walked out on them years ago, he vowed never to let another woman close enough to hurt them again.

Amelia Van Ecken isn’t just another woman. She’s an independent, smart, and savvy businesswoman who doesn’t have time for sex, much less love. In the midst of a drawn-out, bitter divorce, all she wants is to bury herself in work. But when sharp-tongued Amelia and stubborn Andrew cross paths, sparks fly—and burn. Two things are obvious in an instant: they want each other, and they’re from different worlds. It’s the perfect formula for an off-the-charts one-night stand. After all, it’s not as if opposites ever attract.

The First Taste, a standalone spin-off of the Slip of the Tongue.

This book intrigued me from the blurb. A single dad who takes on the role of both parents. And a workaholic woman who also knows how it feels to be betrayed. I read this as a stand-alone and I loved it. I will go back and read the first book because her writing is excellent. Andrew and Amelia are a hot dynamic duo. They instantly have an attraction that they both try to fight. Once they have their first taste, by accident. They can't stop themselves from having many more firsts. They are extremely hot and steamy from the start, while mixing real life emotions into it. Will they be able to walk away after such an amazing one night stand? You must read to find out. No spoilers here. I will definitely be reading more from this author. Her writing was smooth and charming. You are hooked from the start and can't put it down.
*Reviewed for Sweet Spot Sisterhood*

Warning....this review may contain some spoilers. Read with caution. Oh, and you might want to go take a bath after you finish reading.


We first met Andrew Beckwith in Slip of the Tongue. If you have read it, although not necessary, you know that he is Sadie's brother. (If not, you need to go one click and read it ASAP!) Did I mention that he is HOT and a super awesome single dad? His daughter is Bell and Bell's mom, Shana, left them right before Bell turned three. She didn't even leave a goodbye note. Andrew came to terms with it and became the best dad he could be. He should totally get dad of the year. Bell is the Apple of her father's eye. He always puts her first. So much so that he doesn't make himself available for love. Andrew runs an auto shop in New Jersey. He has a tight-knit group of friends that are more like family. They look after him and Bell.

Anyway, enough background. One day when Andrew takes Bell into New York to his sister Sadie's office for a weekend visit he gets mistaken for the plumber by Sadie's boss, Amelia. Since the plumber hasn't shown, he goes ahead and fixes the toilet. That is just the kind of guy Andrew is. So with Bell at Sadie's what is Andrew to do with himself all weekend. Does he stay in the city or go back home to Jersey.

Of course, Andrew stays in New York City and guess who he runs into? Amelia. That's right, Sadie's snooty boss who has no tolerance for children. They hit it off as best as you can imagine and agree to a night of adult fun and beverages. The weekend ends and Andrew and Bell go back to Jersey. Amelia and Andrew have made quite the impression on each other. Amelia is also going through a long and drawn out divorce. So between running her business and her divorce, she isn't making herself available for dating either. So as the book goes on they keep running into each other. Can Andrew cause Amelia to let her guard down long enough to let him and Bell in or will they go their separate ways? You will have to read the book to find out how Andrew and Amelia's story plays out.
**This book was reviewed for Sweet Spot Sisterhood Blog

I was anxious to see if this one match how much I loved the first book, the answer is a big fat yes it actually exceeded it in my opinion.
Andrew is Sadies's brother, he's a single dad to Bell who is the cutest kid, it's just the two of them and they are devoted to each other. He drops her off and his sisters work and the fun begins when he meets Amelia her boss. You will think she is stuck up when you meet her, she's serious, a bit patronizing but you can feel the tension between them. Andrew is everything I look for in a bbf, he's a very dirty talker a total alpha but he's protective, determined and very sexy. Amelia who is an independent woman might just have met a man who can give it just as much as her. There are several stories running through the book that keeps you invested in finding out what's going to happen next, it's angsty and drama filled but very easy to follow the plot of the book.
**Reviewed For Sweet Spot Sisterhood Blog**

ADD it to Goodreads