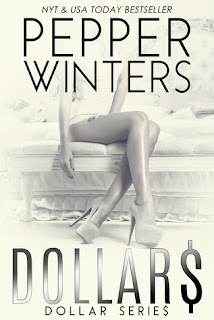 A thief met a possession and did what he did best.
Now, he has to live with the consequences.
Including the girl he claimed.

Pimlico was stolen and sold all before her twenty-first birthday.
Two years with a master who almost killed her is over.
She has a new master now.
A master who demands everything, expects everything, and requires ultimate access to her mind.

Elder broke countless rules when he took the girl who wasn’t his.
She confuses and bewitches him, but his fascination won’t save her from his desires.

So deserving of more than the 5 stars I can give it. This will be a vague review because I'm not going to give anything away.

After the ending of book one I couldn't wait to get this book and it didn't disappoint at all.

Pim may be silent, but even in her silence she manages to convey so much.

Elder is fast becoming my favourite male character ever, I love every mysterious part of him.

The writing is sublime and the storytelling is perfection. You've done it again, Pepper, and I'm waiting with baited breath for the next installment.

This review of DOLLAR$ by Pepper Winters is for The Sweet Spot Sisterhood Blog. I have been waiting for this book for months! I couldn't wait to see what happened to Pim and Elder. I was not disappointed and neither will you be.

I loved DOLLAR$ just as much as PENNIE$. It's another 5 Stars from me! Winters knack for writing dark and twisty is superb. She creates such brilliantly broken characters. Pim and Elder each have a devastating past, but it makes them who they are. PENNIE$ ripped by heart out, but DOLLAR$ has slowly brought me back to life.

There is still some lingering sadness from PENNIE$, but DOLLAR$ gives you hope. Hope that Pim can heal from her past. Pim has so much she wants to say. She continues to write to No One, but destroy it afterwards, because she doesn't want Elder to find her letters like he did at Alrik's. We also learn more about Elder in this book. We get to dive a little into his past.

Elder always told Pim that she was worth more than PENNIE$, that she would be worth MILLION$! She just has to realize her self-worth. Alrik made her worthless, but Elder will make her priceless! I cannot wait to see what happens next for Elder and Pim in HUNDRED$.

“I told you you are worth more than pennies, yet you cling to a dollar as if it’s the sum of your value."

Wow I must start off by saying you HAVE to read Pennies first. Dollars picks up right where the first book left off. Let me just say this is a series that is definitely laid out and will keep us wanting more until the very last page of the last book. But it's so worth it. After reading Pennies, I knew I was in love with Pim. And I had a feeling that Elder would become my favorite. And oh boy was I right. You get so much depth from Elder and the dual POV. I just have to give it to the author, Pepper Winters knows how to draw with her words. There's no other way to explain it. You are literally a part of these characters. The writing makes you feel as though you know them inside and out. The real connection between people is written so vividly. We all know that in life words aren't always needed and Pepper puts on paper how it is to be human. She can describe so many feelings and actions with words that just seem impossible, but yet you are dab smack in the middle of her storm and can feel every crash and wave. I can't wait for the next book, of course. This series is going to be the death of me. I want them all already. 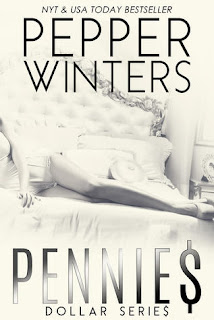 "I'm not the hero in this story, girl. You'd do best to remember that."

At eighteen years old, I was murdered.

I wish my tale ended there.

However, my killer resuscitated me and sold me to the highest bidder, sentencing me to a world worse than Hell.

For the past two years, I've lived a life of torment as a man's property. I suffer in silence and wish for freedom, but I never break.

But then he arrives.

The first stranger since I was killed.

Elder Prest, a thief with a heart as black as his soul, arrives as a guest in our twisted home. He has business with my owner, but his interest lies in me. He pretends not to notice my bruises and hides his knowledge of what I am, but the way he watches me makes me feel more human than possession.

As his eyes tear through my walls and his voice demands answers, he challenges my owner for one night with me.

I've survived two years of torment because I no longer believe in hope, but Elder is the only man who promises me pleasure instead of pain.

Is he my ticket to safety or my ultimate end?

Whoever he is, whatever he wants...I can't say no.


Review by Anne Milne
5 of 5 stars

**Please listen to the authors warnings this is dark very dark do not buy if that's not your thing.

To avoid spoilers I'm not going to go over the story, I'll just tell you what I felt.
From the first page, I was hooked. I stayed up till 2am reading. I just couldn't put it down. There are characters I hated with a passion, one that I was unsure of, but oh, did I come to love and one who my heart broke for... I have so many theories and questions that I know Pepper will drip slowly into the books that are to come and I really can't wait.
Don't compare it to Pepper's other books. Go in blind with an open mind and get ready for a story unlike any other!


Review by AnessaRenee
5 of 5 stars

This book is completely enthralling and intriguing from the first page. Tasmin finds herself in a new world, unlike anything she ever pictured for herself. Alrik is the monster who knows no end. And Elder can be a savior or the new evil! This book is dark in every sense. This isn't about a girl who falls in love with her captor. Pim finds ways to overcome the hand that has been dealt but can she survive it all in the end? This book has a cliffhanger that makes you want to scream. I cannot wait for the next book. Pepper Winters knows how to captivate your mind and hold it for ransom. I don't want to give any spoilers so I will leave this review with my advice to read this amazingly dark book.

This book has a warning for a reason. It is not for the faint of heart. It is a very dark romance. It is nothing like I have ever read before. Pennies is book 1 in Pepper Winter's new Dollars series. It tells the story of 18-year-old Tasmin Blythe. One minute she is a carefree teenager headed off to a charity event and the next she is being murdered only to be brought back to life and abducted. She is then given a new name, Pimlico, and sold to the highest bidder, a man named Alrik.

I would love to tell you that this is the part where they fall madly in love and live happily ever after, but this isn't the case. This is a dark romance after all. Alrik buys Pimlico as a sex slave. He is a very sick and sadistic mandate and her life is made a living hell. She is forced to remain naked, beaten, raped, starved and even shared with Alrik's friends. She tries to no avail to escape this white fortress. She even contemplates suicide as a means to an end. Through all this, she shows such tremendous strength and endurance. There is one this she has never given/relinquished to Alrik or his friends, her voice. Throughout her two years in captivity, she hasn't uttered a single word. It is the one thing he will never take from her. Pimlico finds her voice in writing to No One. She tells us her story in diary form written on toilet paper squares. She hides them from her Master, not letting him hear the only voice she has.

One day a man by the name of Elder Prest shows up to negotiate a business deal with Alrik. Alrik makes Pimlico dress for the visitor and warns her he knows nothing about their arrangement. Alrik wants to keep his true relationship with Pimlico in the dark. Pimlico suffers a panic attack that puts Alrik's secret in jeopardy. Elder comes to Pimlico's rescue that night and sees right through Alrik's scam. They form this connection, an unspoken bond. After Elder leaves, Alrik punishes Pimlico because of this.

Will Elder return for her? What will Alrik"s punishment be and how far will he go? What will become of Pimlico?