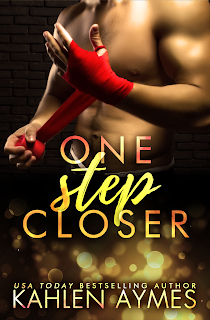 ONE STEP CLOSER
by Kahlen Aymes

He hated that f*cking word.

The sudden death of his estranged father calls Caleb home and face-to-face with Wren for first time in years. He is presented with a choice that forces him to confront the painful memories of his youth and his many regrets with Wren.
Like it or not, his father's last, hard lesson, will demand Caleb deal with his long denied emotions for Wren, or let go of her forever.
- - - - - - - - - - - - - -

When I think of an author who writes intense love stories I always think of Kahlen her words combine to pull together a fantastic book.
Caleb is a young man full of pain and anger when his father remarries and Wren becomes his stepsister. What starts as indifference and hate quickly changes and a deep unyieldingly friendship and love is born.
I loved Caleb his devotion to Wren is truly beautiful, the way he protects and encourages her made me swoon. Wren is such a sweet girl she's beautiful inside and out despite having a witch for a mother.
The bond and chemistry between the two when they meet again hasn't gone away if anything it has grown stronger. There are so many obstacles in their way not least family and their own perceptions of their relationship.
This is a beautiful second chance love story that is beautifully written.

Review by Becky Rendon
3.5 of 5 stars

Caleb could possibly hate his father more but he's not sure how.
Wren used hide in the shadows until Caleb made her join the light.

Caleb shattered her heart. Now he has a chance to try and make it right.
Wren never forgot what he did but she has never been able to hate her Superman.

First love, second chance.
They hate being called siblings. Yes- their parents were married at one point but they aren't blood. They can't help how they feel.

Will this sad day bring them the opportunity for closure or a chance to start anew?

It's a sweet story with enough backstabbing b!tches that the drama continues. A predictable but fun read. How can you resist a protective, alpha bad boy millionaire the guy who kept your personal demon (reads: mother) away?

Posted by Sweet Spot Sisterhood at 2:35 AM