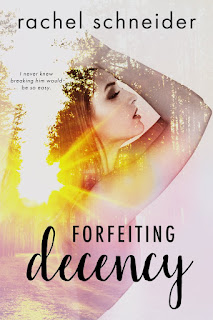 “Sleeping with married men doesn’t bother me as much as not having a place to live does.”

Kaley Monroe lived a life of privilege until her father went to prison four years ago and all of her family’s assets were seized by the federal government. Fending for herself, she relied on what comes naturally to her—her beauty. Having sex for money isn’t glamorous or ideal, but it’s manageable. She doesn’t expect life to show her any mercy, and she won't live in ignorance.

It’s not until Kip Foster is released from prison that her life starts to feel complicated. Somehow, Kip unearths desires in Kaley that she never knew she had. A desire to be more, to feel more, and...to be loved more. However, lies by omission are the most dangerous secrets, and they refuse to remain hidden.

I really enjoyed this book. The two man characters, Kip and Kaley, were both complex and difficult characters, but loved them both. Kip stole my heart.

Kaley's life changed when her father's life imploded and to make ends meet she sleeps with men for money. Does she want to or does she enjoy it, absolutely not, but in a sense she's trapped.

Kip is a friend from her past who's recently been released from prison. They've always been close, but when they meet again sparks fly. Lilly is Kip's sister and was Kaley's best friend, but they've been out of touch for years.
You may not like some of the decisions Kaley makes, but as the story develops you understand why she does it. Until Kip, I think that Kaley really was on her own. I understood Lilly's anger, but I felt Kaley's pain at her indifference. I must admit I wanted to shake her more than a few times.

The love between them is strong, deep and felt so real. Love isn't easy and this story shows it warts and all. It's definitely not plain sailing for them.

It's a story full of twists and turns with lots of secrets. This is a book I won't forget.

This was a story filled with choices and consequences. Kaley finds herself in a position where life isn't fair but you have to keep pushing through no matter what. Instead of leaning on anyone she finds her own ways to survive this harsh world. Her choices definitely aren't what everyone would chose, but she does what she has to. There were times I wanted to slap some sense into her, but her character really grows on you as you find out more about her and why she makes the choices she does.

Kip is definitely the hot bad boy and starts to show who he really is under all the facade that he has built up. I fell for Kip. His character really develops and you instantly want to know everything there is to know about him.

Will Kaley and Kip finally find someone they can lean on or will hidden truths be the things that destroys anything they could possibly build? You must read to find out. I read this as a standalone and it was a smooth flow and I didn't feel as though I was missing anything by not reading the first book.