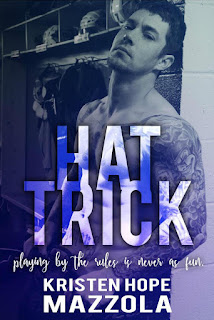 One accident - a freaking car crash.

That’s all it took to send my brother’s and my life into a tailspin with no end in sight. I was going to be something. I was going to be the best. I had the Olympics in my sights. And it all went to shit in one flash. Brayden wasn’t ready to raise a younger sister when I was thrown into his lap. He had his life and everything going for him. Thankfully, he was still drafted to his dream hockey team. The same one dad played for when we were growing up.

It took time, but I started to get better, started to open up, started skating and even dating again. I even thought I found the perfect guy for me.

Isn’t it funny how guys hit on you when they know you’re not available, but when you’re single they won’t give you the freaking time of day? I guess the game is more fun that way. And for the captain of my brother’s team, that’s exactly what I was. A hat trick is three goals in hockey. Some say three is a crowd and they might be right.

I was Gavin Hayes' unobtainable goal.

This review of Hat Trick by Kristen Hope Mazzola is for The Sweet Spot Sisterhood Blog.

It is a sweet sports romance. If you like hockey, then this one is for you. I give it 5 Stars. I'm not huge on sports romances, but I have to say I really enjoyed this book. It was a quick read and definitely one-click worthy. Also, it was my very first Kristen Hope Mazzola book and I will definitely be checking out her other ones. You should too if you haven't already.

Hat Trick is the story of Myla and Gavin. Myla was a competitive figure skater with Olympic dreams until she was in an accident. That accident also took the life of her mother along with her Olympic dream. The only family she has left is her brother, Brayden. Their estranged father is in prison. Gavin is Brayden's hockey teammate. They play for the Otters. Gavin is the Captain and his dad is the Coach. Gavin falls for his teammate's sister, Myla. Will Gavin, a notorious playboy, settle down or will he break her heart? What does Brayden think of all this?
~~~~~~~~~~

I'm a huge fan of Kristen's work so this was a no brainer for me to read.
This is the story of Myla, Gavin, and her brother Brayden. Myra was an aspiring Olympic skater until an accident stopped her dreams in their tracks. Gavin and Brayden are hockey teammates who really don't get on.
I loved the closeness between Myla and Brayden, they support and love each other unconditionally, really glad there was no sibling angst or rivalry.
Gavin is a bit of a player, but when he shows an interest in Myla, her brother is not happy.
I really liked all the characters. They were very realistic to me. It was a great story that kept me invested from start to end.
*Reviewed for Sweet Spot Sisterhood
~~~~~~~~~~

Review by Anessa Renee
5 of 5 stars

Are you looking for a fast read? A scorching hot sports romance? I mean who doesn't like a hockey player. What about a sibling bond that's unbreakable? Teammate falls for the sister? This book has all of that and more. Myla finds herself in a situation that she never could have imagined. Her life was thrown into a complete tailspin. Can she regain her love for figure skating? Will she get over feeling like a burden to her older brother, Brayden? Gavin has his own issues he has to deal with also. This was definitely a fast read and could have had more depth to the characters, because I felt like they had so much potential, but I loved it for a fast read to enjoy.
* Reviewed for Sweet Spot Sisterhood *
~~~~~~~~~~

Review by Becky Rendon
3 of 5 stars

I loved the idea behind this book... Playboy hockey player falls for teammate's sister.

I was disappointed though, because it moves along so quickly. It has the potential to really stick, but there's no depth. The dialogue becomes trite and sappy.

It was a quick read and it was fun. I wish the author had dug a little deeper. It's shallow and leaves a lot to be desired.

Posted by Sweet Spot Sisterhood at 1:34 AM